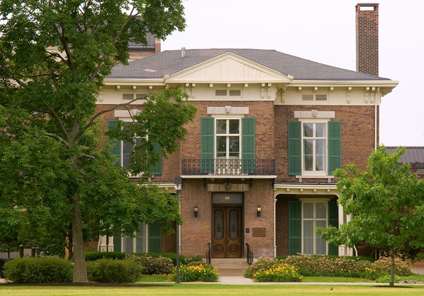 When the Indiana State Normal School was chartered by the Indiana General Assembly in 1865, Condit House was already five years old. During the subsequent expansion and development of the school into a college and university, its campus eventually grew to surround this distinctive landmark.

Condit House was built in 1860 by Jabez Hedden for Lucien Houriet, a local jeweler and watchmaker. The Reverend Blackford Condit and his wife, Sara Louise Mills Condit, purchased the home from Houriet in 1863. Their infant twins, Charles and Charlotte, died soon after the family moved into the house. Other children born to the Condits were Sarah, Emma, Howe Allen, Blackford, Helen and Joseph Dayton.

Sara Louise Condit was the daughter of Caleb Mills who is considered the "father of the Indiana public school system." Mills was a frequent visitor to Condit House during his tenure as the second Indiana Superintendent of Public Instruction and throughout his distinguished career as a professor at Wabash College. Indiana State's highest teaching award is named in his honor.

Possession of the home passed to daughter Helen Condit, who lived her entire life in Condit House.

The home was utilized by the Office of Alumni Affairs and the Indiana State University Foundation from 1963 to 1966. At the request of Dr. Alan Carson Rankin, the seventh president of Indiana State University, the Board of Trustees authorized the restoration of Condit House for use as the residence of the President. Restoration and expansion of the home was completed in 1967.

With the selection of the university's eleventh president, Dr. Daniel J. Bradley, the Board of Trustees expressed interest in having Condit House once again serve as the official residence of the President.