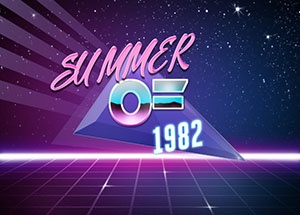 In 1982, Americans were treated to a summer of blockbusters and future classics unlike any other time in cinema history. Star Trek II: Wrath of Khan, Blade Runner, E.T., The Thing, Tron, Officer and a Gentleman, Fast Times at Ridgemont High, and a host of other movies cemented their place in cinema history and became a cultural rallying point for a generation.

The early 1980s were a time of change in America. Ronald Reagan created policy shifts from the Carter administration concerning the Soviet Union. The Doomsday Clock ticked closer to midnight. Video arcades, packed with quarter-laden gamers, enjoyed a golden age. Movie theaters were crammed into shopping malls, adding more screens, seats, and choices. Hollywood forces created 1982’s summer of blockbusters and left a legacy stretching through modern day. This course investigates why the summer of 1982 is so influential on present-day American film and popular culture.

We will view eleven films from the summer of 1982—in order of release—and investigate themes within. With targeted readings, the class will look at 1982 America through a cultural lens to see how politics, technological innovation, attitudes toward education, concepts of masculinity, exile, and working class struggle connected a summer of blockbuster films with the American public.

Androids, aliens, Crom, Khan, and Jeff Spicoli left their mark on America and we are going to find out why.

Please contact Professor Bird if you have questions about this course.