The Alan C. Rankin Distinguished Senior Award recognizes outstanding men and women of the senior class who have contributed to the betterment of Indiana State

University. Award recipients demonstrate dedicated leadership on campus and in community organizations. They show the desire and commitment to improving ISU and continue to live up to the ideals and values of Indiana State University. Indiana State students with a 3.25 grade point average and more than 94 credit hours are eligible for the Alan C. Rankin Distinguished Senior Award. The Signature Events Committee, made up of Indiana State University Alumni Association Board of Director members, reviews the nominations and selects 15 finalists to be invited to the Outstanding Junior and Senior Awards every spring. Two males and two females from each class are selected to receive these prestigious awards and are notified during the Outstanding Junior and Senior Awards.

After World War II, he worked at various universities in different roles. 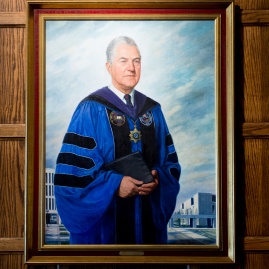 In 1964, a colleague of Rankin's nominated him for the presidency of Indiana State University, and he began the duties of that office on July 1, 1965. His tenure spanned the greatest period of growth in ISU's history - and a turbulent time for colleges and universities across the country. During Rankin's term as president, ISU-Evansville began operation; doctoral programs in selected areas were approved; the School of Health, Physical Education and Recreation was established; Married Student Housing units were constructed; Mill, Rhoads, Hines, and Holmstedt Halls were completed as was Cunningham Memorial Library; Condit house was designated the residence of the president of the university; Memorial Stadium was acquired; the university awarded its first Ph.D. degree; and Hulman Center was completed.

Some of Rankin's other successes included bringing the Contemporary Music Festival to ISU in addition to a satellite site of the Indiana University School of Medicine known as the Terre Haute Center for Medical Education (a two-year residency program). Indiana Special Olympics originated during his tenure, and Hoosier Boys and Girls State Summer Conventions relocated to ISU.