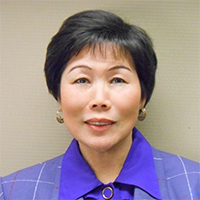 Dr. Karen Chia-Yu Liu is a Professor Emerita of early childhood education at Indiana State University. Liu's accomplishments are reflected in her scholarship and services to her professional field, school, and community.

Liu has disseminated more than 100 scholarly works, which include monographs, book chapters, journal articles, research papers, professional conference papers, and international presentations. As an internationally recognized early childhood educator, she has served as keynote speaker, consultant, and workshop trainer in many Asian countries, including Thailand, Taiwan, Hong Kong, Macau, China, Malaysia, Singapore, South Korea, and Japan. She has also presented her work in Brazil, Germany, Russia, and Denmark. By promoting dual language learning, Liu has involved with the Chinese School of the Wabash Valley (CSWV) since its inception in 2008, the Chinese School of the Wabash Valley is a community partner of the Bayh College of Education at Indiana State University. She currently serves as a board member and chief school administrator.

Liu has received many honors and awards. She was profiled in the Who's Who Among Asian Americans in 1994. She received the Petty Smith Hill Professional Achievement Award in recognizing her leadership and contributions in early childhood field globally by the Association of Childhood Education International (ACEI) in April, 2012, the President's Medal for Excellence in Teaching and Research in 2011, Holmstedt Distinguished Professor title in 2002, President's Commission for the Enhancement of Diversity Award in 2002, and the Distinguished Early Childhood Educator in Higher Education in 2001 Liu was elected as the President for the Association for Childhood Education International (ACEI) from 2008-2010, the first non-North American president in ACEI's 114 years history. Liu is currently serving as a Board member for the World Organization for Early Childhood Education.