After initially charting a career path in business, she decided to teach high school business classes. Following graduation from Indiana State in 1967 with her master's in business education, she stood in a job placement office hoping to schedule interviews when she heard an unexpected question: had she ever considered teaching at a junior college?

That question helped lead to her career teaching business classes to college students for more than 35 years. Though she is now retired from teaching, she is still dedicated to educating business students - in a different way.

Hockemeyer's commitment to the Indiana State University Foundation has helped establish the Business Permanent Art Collection fund. The resources committed to the fund from Hockemeyer and future donors will be used to purchase artworks to be placed in and around Federal Hall, the former downtown Terre Haute federal building that underwent a more than $20 million renovation to house the Scott College of Business.

"I hope that many alumni are encouraged to contribute to it," Hockemeyer said of the permanent art fund. "I hope that as students are wandering the halls and sitting in the classroom, they have different kinds of art, from modern to old to sculptures to paintings around them, and it becomes part of their environment."

Hockemeyer enjoys art, and she wanted to share that passion with Scott College of Business students. After an alumni gathering in Palm Springs, Calif., she saw a video of the renovated Federal Hall, which inspired her commitment.

"I was very impressed with having heard about the growth of ISU," said Hockemeyer, who also graduated from Wiley High School in Terre Haute before receiving her bachelor's in business from Indiana University. "Seeing the video of the Scott College of Business, it just really struck me that students could benefit with having art on the walls of this gloriously old building."

She recently toured Federal Hall during her first trip back to Indiana State since receiving her master's degree more than 40 years ago. The recent renovations preserved many of the traditional art deco elements of its initial creation.

One renowned artwork, a wall-sized mural of the Magna Carta signing, has long been a staple of the former federal courtroom. A sculpture of a buttonwood leaf, which commemorates the 1792 stockbrokers meeting under a buttonwood tree that created the New York Stock Exchange, sits outside of Federal Hall and was dedicated when the renovated structure was opened. Buttonwood trees are also commonly referred to as sycamore trees.

"As our current collection indicates, artwork can become part of an aesthetic educational lesson to business students, and any visitor to the Scott College of Business," Dean Brien Smith said. "The new pieces of artwork that will be created from this fund will help continue Sherry's legacy of educating college students through one of her favorite passions, art."

While she didn't set out to teach college students, she quickly realized how much she enjoyed it. She frequently taught introduction to business courses to first-year students, which many other faculty members shied away from. Yet she embraced it. Rather than shunning her students, such as one with green hair - who would "sit and preen all day long," Hockemeyer said - she engaged them. "That green hair is wonderful!" she'd say. "And tomorrow, the blue, I'm just as excited to see!"

"I think that college freshmen are just wonderful," added the veteran business educator, who also ran the MBA program at Indiana University - Purdue University Fort Wayne during her career. "They're just beginning to come away from high school, and starting to find their own. They do so many different things, and you just have to embrace it."

Hockemeyer's commitment of both a current and planned gift, along with the new fund will teach students while helping them to engage with the environment around them, Smith said. Artwork "inspires passion in those who interact with it, and that's important," the dean added. "There are many emotions that move through us as we go through life," Smith said. "Certainly there's love and happiness, but also sorrow and pain. When we interact with meaningful art, it stirs those passions within us."

While people may not normally consider it, having art to teach students is just as important in the Scott College as it would be in any other environment, the dean said. The timeline on purchasing art will be based on the donations that are made to the fund.

"When you give a gift, you become a part owner in something. I think that's very important," Smith said. "I want members of the community to feel like when they give a gift to this fund, not only are they helping to beautify the building, but they are becoming part-owner in something significant." 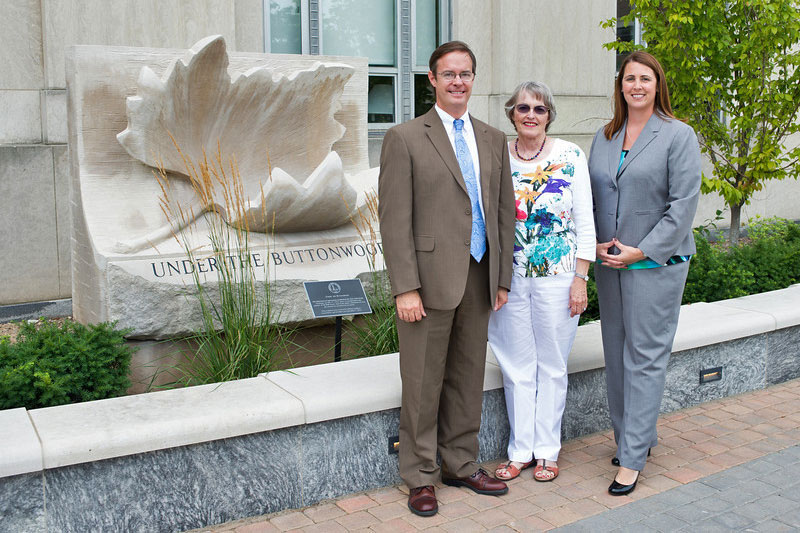 Scott College of Business Dean Brien Smith, Indiana State University alumna Sherry Hockemeyer, and Catherine Saunders, executive vice president of advancement for the ISU Foundation, near the Under the Buttonwood sculpture outside Federal Hall, which houses the Scott College. Hockemeyer's commitment to Indiana State has established the Business Permanent Art Collection Fund, which will be used to purchase artwork to be housed in Federal Hall.