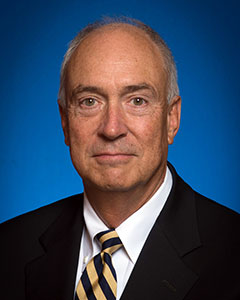 A gift from Indiana State University alumni Jeff ('75) and Penny ('76) Taylor named and established the Dr. Max E. Douglas Student Advising Center (FD124)  in Federal Hall. The gift recognized Douglas' more than 40-year commitment to students, said Jeff Taylor who, like his wife, holds a bachelor's degree in accounting from Indiana State. Taylor recently retired from Pearson plc, one of the world's largest education companies. He served in a number of leadership positions with Pearson, including senior vice president of U.S. government policy and investor relations. Prior to joining Pearson in 2000, the Indiana State University graduate served as vice president and chief financial officer of National Computer Systems, an education testing and software company. He is a member of Indiana State's Board of Trustees until July 1, 2017, and on the board of directors of Capella Education Company.

Jeff has spoken at Indiana State many times including the inaugural, student-run Ethics Conference in 2006.