Consideration for this scholarship shall be given to an Indiana State University student(s) who meets the following criteria:

Scholarship may be renewed annually for up to two years.

Selection Procedure: Recipients of "The Bessie" shall be selected based on the criteria and on the recommendations of a scholarship committee appointed by Gender Studies

Each recipient will receive a plaque or certificate, as well as a copy of Louis E. Dailey's book, Justice Off-Balance, as long as copies are available. 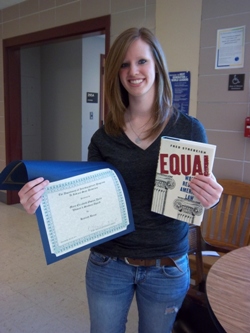 Graduating students are eligible for several Awards: Outstanding Student, Coordinator's Award, and "The Bessie". Faculty nominate students for these honors, which are presented at an end-of-semester event in the spring. For more information, see Scholarships & Awards.

The Gender Studies Program has exposed me to a vast number of diversity-related issues. These issues have challenged my thinking and have altered the way I learn inside and outside the classroom. (Laura Wolk, communication major, gender studies minor)