The brown recluse (Loxosceles reclusa) can be found in almost any county in the southern half of Indiana and becomes less common as you travel north. In Ohio, the brown recluse is found in the southwest portion of the state and becomes less common as you travel north and east.  Cold winter weather limits the northern distribution of recluses in the wild, but some populations accidentally transported outside the natural range may persist in climate-controlled buildings.  An introduced species of recluse spider, the Mediterranean Recluse (Loxosceles rufescens), has been documented in both Indiana and Ohio but little is known about its distribution in the bi-state region.  The brown recluse and Mediterranean recluse look almost identical differing at the microscopic level.

Recluses are rarely found outside the area shaded in red. Such encounters should not be interpreted as a broadening of the species typical range.  Map by Dr. Richard Vetter

The most common means of identification of brown recluses is to look for the “violin” pattern on the spiders back (cephalothorax).  This method, although useful in identification, is not fool-proof because many other species of spiders found in Indiana and Ohio homes have markings on their backs.  Here are some tips for brown recluse identification: 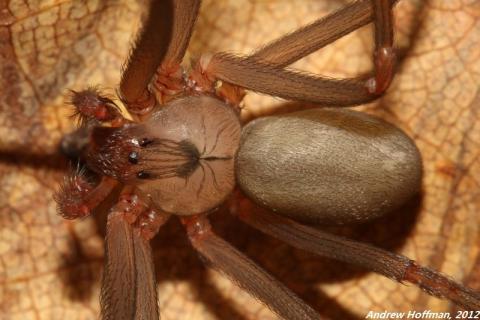 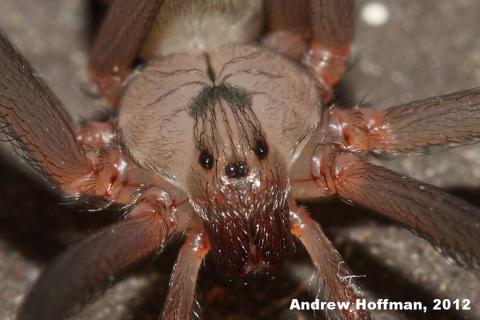 Eye arrangement- brown recluse have 6 eyes arranged in three pairs or dyads. This feature can easily be seen with a good magnifying glass, hand lens, or dissecting microscope.

Size: an adult brown recluse is about the size of a quarter, including its legs. 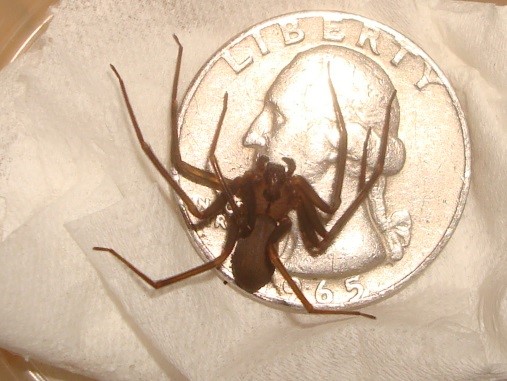 Projected Goal of this Study

The brown recluse is a spider of medical significance.  In rare instances, its bite can cause severe tissue damage.  A better understanding of the distribution of the brown recluse in Indiana and Ohio can assist the medical community, pest control community, and the general public in avoiding misidentifications and misdiagnoses which could delay proper treatment for other medical conditions.  Dramatized photos and dubious stories on the internet have elevated public concern about brown recluses leading the general public to believe the spider occurs throughout the United States.

IF YOU ARE READING THIS, SEND ME YOUR SPIDERS!

Common spiders found in and around homes that are often mistaken for brown recluses:

Recommended method of capture  Spiders can be corralled into a container without direct contact.  Slide a piece of paper under the jar and spider, then invert the jar and tap the spider to the bottom of the jar.  Quickly remove the paper and seal with the lid. This method minimizes damage to the spider.

Sticky / Glue Traps for Capturing Spiders: The best placement of traps is flat on the floor against a wall or other object.  Recluses tend to prefer clutter and relatively undisturbed areas (a garage, barn, basement, attic). Leave traps out for several days or even weeks, and place two or three per room for maximum control. Many traps have space to write information on them -- you can put your collecting information there. Be sure when you pick up the traps not to touch the spiders. They can survive for days or weeks on a trap, and although immobilized by the glue, they may be quite alive and capable of biting. When the traps are full of bugs or have some spiders on them, you can then place them a box, padded to protect the specimens during shipment, and mail them.

Recluses are not aggressive and tend to run away from a disturbance or threat. Bites accidently happen when people grab a spider without seeing it, or when they put on clothing where a recluse has taken up residence.  Recluse prefer areas that haven't been disturbed for a long time- clothes you haven't worn in months (especially shoes and gloves), boxes in garages and attics, woodpiles, rock piles, etc. Keeping a few sticky traps where the wall meets the floor in the rooms you inhabit regularly will keep wandering recluses in check and make you feel more comfortable each time you see one stuck helplessly on the trap.

Special thanks to Dr. Donna Selman for granting permission to create this webpage, Andrew Hoffman for photos, and Maria Forsythe for maintaining this webpage.