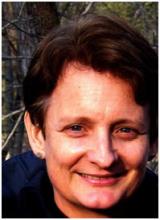 Ph.D., University of Texas at Austin

Sexual selection is responsible for many differences between males and females (sexual dimorphism), and it also can result in relatively discrete differences among males (Alternative Reproductive Tactics) that can be as extreme as male-female differences. Research in Dr. Hews' laboratory examines sexual selection at the interface between physiology and evolution. Dr. Hews seeks to identify the sources of selection favoring the evolution of such between- and within-sex differences, and how the underlying hormonal control of such differences has been shaped by natural and sexual selection. Differences in behavior, particularly aggression and territoriality, and in related morphological traits (body size, body mass, color signals) are the focus of work in the Hews lab. Interactions and trade-offs between sexually-selected signaling traits and other physiological systems, including immunocompetence and the hypothalamic-pituitary-adrenal axis, are studied. A new focus is starting to examine the effects of environmental endocrine disrupting compounds on sexual differentiation, in vertebrates that occur in the Wabash Valley wetlands. 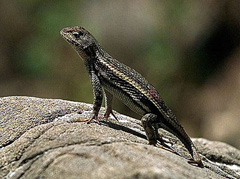 Males of Sceloporus virgatus are an example of a species without blue abdominal patches that most other male Sceloporus express. Sexual dimorphism is ancestral for Sceloporus so this white abdomen represents a male loss of a secondary sexual trait.
© 2001 by David Sanders

A major area of research in Dr. Hews' lab involves the study of color signals & chemical signals used in social communication. A relatively new long-term project focuses on fence lizards (Sceloporus). Males of some Sceloporus species are "feminized": these species have evolutionarily lost the color signals that, in most Sceloporus, are expressed only in males. Males in these species are also less aggressive than males of typical species. In other species, females are "masculinized", expressing this normally "male-only" color trait and also elevated levels of aggression. Thus, Sceloporus species differ in the degree and nature of some aspects of sexual differentiation. Hormone manipulations can identify actions of early (pre-hatching and hatchling) and late (adult) differences in hormone levels in contributing to species differences in sexual differentiation. Comparing among species will identify how hormonal control mechanisms have evolved. Histological description of color signal production in several Sceloporusspecies have assisted in identifying cellular targets of hormone action. Current work is examining the epithelium of the vomeronasal organ (VNO), and asking if there asex and species differences in VNO size that map on to sex and species differences in the relative importance of chemicals signaling and aggression in Sceloporus.

Seddon RJ, Hews DK (2016) Populations of the lizard, Sceloporus occidentalis, that differ in melanization have different rates of wound healing. Journal of Experimental Zoology, Part A 325: 491-500.

Quinn VS, Hews DK (2010) The evolutionary decoupling of behavioral and color cues in a multicomponent signal in two Sceloporus lizards. Ethology116: 509-516.

Quinn VS, Hews DK. The influence of androgens in development and expression of secondary sex characteristics in the sexually dichromatic Sceloporus undulatus consobrinus and monochromatic S. virgatus lizards.