There are two sets of cryogens required to operate our AC-250 NMR, liquid nitrogen (LN2) and liquid helium (LHe).  These are both used to keep the superconducting coils that power the magnet cooled below its critical superconducting temperature (Tc).

Temperature Issues
The outside air is typically at around 20-25 degrees Celsius (293-298 Kelvin).  The Tc of the superconducting coils is generally around 10 K, or ten degrees above absolute zero.  In order to insulate the magnet, there are a series of cooling dewars and vacuum chambers to insulate the coils.  First there is vacuum space surrounding an outer dewar in the magnet that is filled with LN2.  The LN2 precools the inside of the magnet to 77 K.  There is then a second vacuum space that is also filled with radiant insulation (aluminum or reflective mylar) that shields the inner dewar which contains the superconducting coils and is filled with LHe.  The LHe serves to maintain the coils at its temperature of 4 K.

Filling Liquid Nitrogen
Each of these liquids must be refilled on a regular basis as they boil off over time.  The nitrogen has to be filled at least every two weeks, although we generally fill it weekly.  Shown below is our stockroom manager Erik Ingebrigtsen, filling the LN2.  This simply requires connecting the tank to an inlet on the top of the magnet in the rear.  LN2 is then transferred until the dewar is full, which can be seen when liquid begins coming out of the vent tubes (shown in front).  Notice that the transfer line is simple latex rubber tubing (you can see by the white color that it is frozen and has ice collecting on it).  An important part of filling is that the delivered liquid nitrogen must be in a stainless steel dewar, which is nonmagnetic.  If an ordinary steel dewar were used, it would be attracted to the magnet, which would be dangerous and could injure personnel between it and the magnet.  Impact with the magnet could damage the magnet or cause a quench.  A quench is a condition that occurs when the superconductor loses its ability to conduct and dissipates the current as heat.  This causes a rapid boiloff of the liquid helium in the dewar and can damage the coils and create an asphyxiation hazard in a small room.  Large NMR magnets have been known to drag full gas cylinders from a considerable distance or grab steel wrenches from the hands of personnel that then fly through the air toward the magnet.  Anyone in the way might be seriously injured. 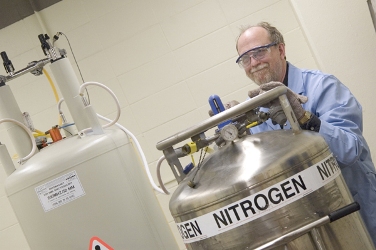 Filling Liquid Helium
About every six or seven months, we have to fill the inner dewar with LHe.  This is a somewhat more involved process.  First the outer dewar is topped of with LN2 as shown above.  Then the inner dewar must be filled with LHe.  The cost of LHe is many times that of LN2.  it is delivered in special dewars that have the discharge tube at the top of the dewar.  Before filling, the dewar is "thumped" to determine the amount of helium inside.  Thumping involves using a long stainles steel tube that has a large opening at one end.  When the tip of the tube is near the surface of the liquid helium, the boiling creates a thumping that can be felt at the top of the tube (see where the thumb is).  The frequency of this thumping changes when the tube is at the surface.  by measuring the distance that the tube is inserted, one can pretty accurately determine the volume of LHe in the dewar. 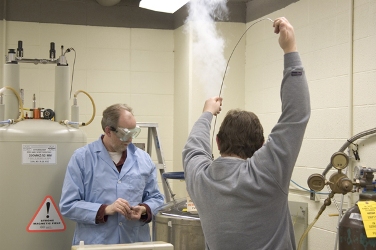 Next the fill begins.  First, a cylinder of He gas is connected to the LHe dewar.  This is so we can pressurize the dewar to help transfer He through the transfer line.  Left alone, the dewar will not generate enough pressure to transfer the liquid in a reasonable time.  Typical pressurization is only 1-2 psig.  More than that will cause the liquid to flow too rapidly. 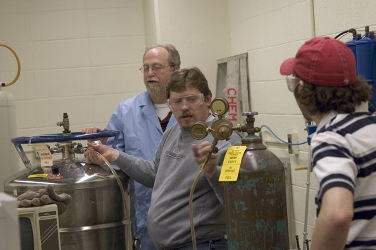 Next the transfer of helium begins.  This requires the use of a special insulated transfer tube, which is connected to the dewar and then inserted into the magnet once LHe (liquid, not just cold gas) is seen coming from the end.  Notice the tape on the insertion line.  This indicates the maximum depth of insertion.  On older magnets there was no baffle to break the fall of the LHe entering the dewar.  If filled strongly, this could sometimes create enough of a splash inside to cause the higher temperature (10-12 K) gas to contact the superconducting coils and cause quenching. 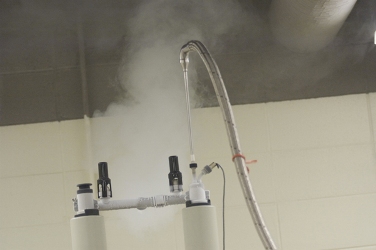 Once the transfer line is in place, the fill rate is monitored by watching the plume of gas exiting the rear of the LHe manifold.  We keep the plume size to around 10-12".  It is important not to fill the magnet too rapidly as LHe is a superfluid.  If the flow is too rapid, you can end up discharging more LHe than you put into the magnet.

Over the course of the fill, the manifold will get so cold from the LHe that it will begin to condense air on the outside and cause liquid air to rain from the manifold.  Drops of it can be seen below on the right side of the horizontal tube.  The assembly with the black shield over it is a check valve.  It will release pressure inside the magnet in the event of a quench.  In the foreground is the fill tube (vertical) and the LHe level sensor (canted). 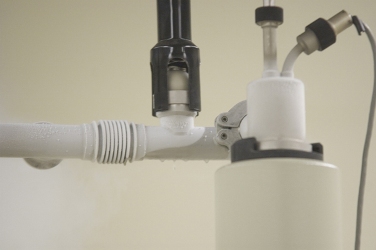 When LHe can be seen exiting the manifold in the back the dewar is full and we are good for another six months.