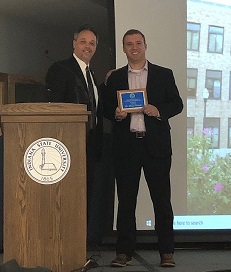 Brian P. Schaefer received his PhD from the University of Louisville in 2015. He is an expert on the dynamic interrelationships between police and society, his work focusing more particularly police discretion, use of force, and training and  technologies. He has participated in multiple collaborative research projects including a Project Safe Neighborhoods grant that evaluated hot spots policing and focused deterrence, and the evaluation of Louisville Metro Police Department’s Implementation of Body Worn Cameras. His interest in the theory and practice behind body cameras for police officers led to his co-authored “outcome evaluation” report on wearable video systems for the Louisville Police Department. 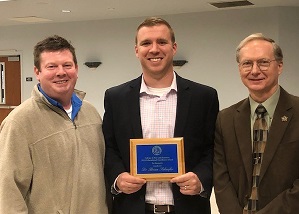 Just within the last three years, he has established an impressive record of funded projects and peer-reviewed publications, including in 2019 the Fourth Edition of The Police and Society: Touchstone Readings, and articles in some of the most competitive and prestigious journals in his field: Deviant Behavior; the American Journal of Criminal Justice; Surveillance and Society; Criminal Justice Review; Race and Justice; Theoretical Criminology; Criminal Justice Studies; British Journal of Criminology, and more. Also very active in the areas of grants and conference presentations, and a participating faculty member in the Data Collaborative for Justice: Strength in Numbers, at John Jay College in New York. 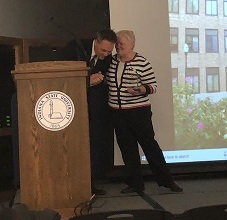 Toni Roloff, Department of Theatre, started at I.S.U. in 1974 in the School of Nursing, moving to Theatre in 1979. Her nominator wrote: “Never have I personally seen an individual so dedicated both to their position and the welfare of their department as Toni Roloff.” Toni manages the day-to-day operations of a complicated Department, she runs the ticket office during the year and the summer, and is business manager for the Crossroads Repertory Theatre. She’s there many nights and weekends, taking care of faculty and especially students. As one long-time Theater faculty member summarized: Toni “returns to the box office night after night for every show in order to help students who are just learning how to do their job or just to cover what needs to be covered.  She also does this as Manager of Crossroads Rep.” Toni herself concluded: “I have considered myself very fortunate to work with groups of talented and dedicated faculty, staff and students for almost 40 years.   In my position, I have watched and helped students to find and grow their talent and then go out in the world to create Theater.   Moreover, in the summers, I have been lucky to work with some of those students, graduates and Theater artists from all over the world to bring creative theater for those at ISU and the Wabash Valley.”