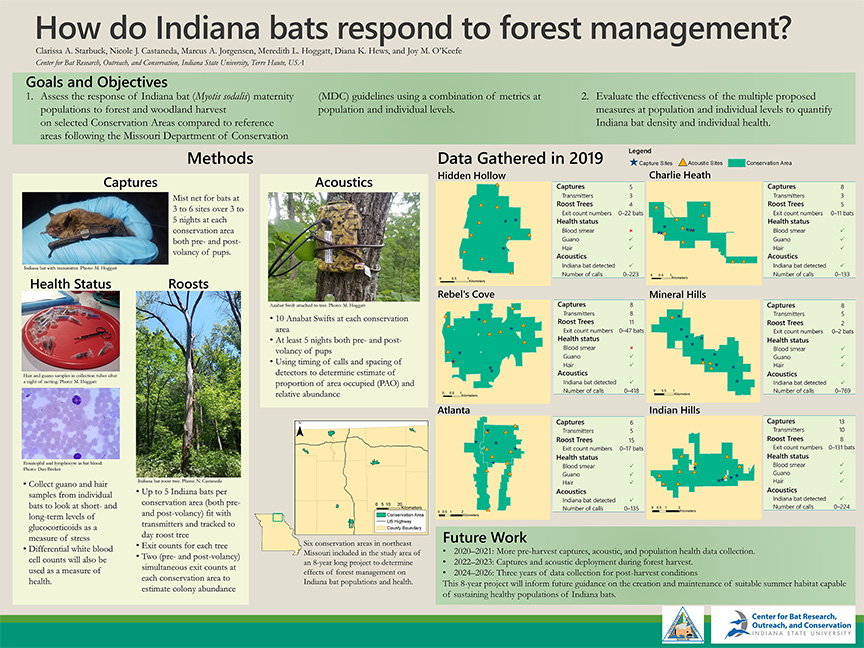 How do Indiana bats respond to forest management.NASBR2019.pdf

An accurate understanding of population status is fundamental for the management and recovery of endangered species. The Missouri Department of Conservation (MDC) project is funded to run from 2018-2025, and was awarded to Drs. Joy O’Keefe (University of Illinois- Urbana Champaign), Diana Hews (ISU) and Joanna Whittier (University of Missouri). The project objectives are twofold: (1) Assess maternity populations of the endangered Indiana bat (Myotis sodalis) on manipulated Conservation Areas (CAs) and compare the bat responses to forest and woodland management actions that follow MDC Guidelines for this endangered species to similar populations on reference CAs. (2) Evaluate the effectiveness of proposed measures to quantify Indiana bat density and individual health. The MDC project is an eight-year study of bats in six conservation areas (CA, Figure 1), paired to produce three manipulated CAs and three control CAs. Focusing on the endangered Indiana Bat (Myotis sodalis) we are using multiple sampling approaches. We use acoustic detectors to measure occupancy and proportion of area occupied, and to monitor Indiana bat activity to measure relative abundance throughout the maternity season (from early maternity period to colony break-up). We track female Indiana bats to roosts and will conduct simultaneous exit counts of bats at roosts within a CA to get an estimate of population size. We measure health parameters of adult females and early volant young. By assessing these metrics over the entire course of the proposed study, with a before-after comparison approach, we will indirectly assess colony persistence relative to management activities. Capture data and basic measurements are collected on individuals of all bats captured, not just the focal species (Indiana Bat, Myotis sodalis), including declining species such as northern long-eared (Myotis septentrionalis), little brown (Myotis lucifugus) bats, and tri-colored bats (Perimyotis subflavus).

Several health measures are being assessed. Altered mean body condition in each sex/age-class category could result from several nonexclusive mechanisms (e.g., habitat alteration, disturbance altering foraging success of bats; altered thermal properties of roosts). Stress hormones also may be altered, as higher levels of glucocorticoids (cortisol or corticosterone, hereafter GCs) can occur following exposures to stressors and chronic GC elevation can have a variety of adverse effects (e.g. suppressed reproductive activity, suppressed immune function) and chronic perinatal stress, via maternal transfer (in utero or lactationally), can affect subsequent stress reactivity of exposed offspring once adult. These GCs bioaccumulate in body tissues including hair. Our GC measures from hair samples will capture the “stress exposure” of prenatal and postal periods in young of the year captured in the summer. We also use thin smears of blood to determine white blood cell counts, as high neutrophil counts can indicate relatively strong innate immunity and to evaluate for blood-borne parasites via microscopic analyses (prevalence and load) of filaroid nematodes, trypanosomes and some other blood protozoans. Fecal pellets are analyzed for parasite egg counts, along with measure of ectoparasite loads. 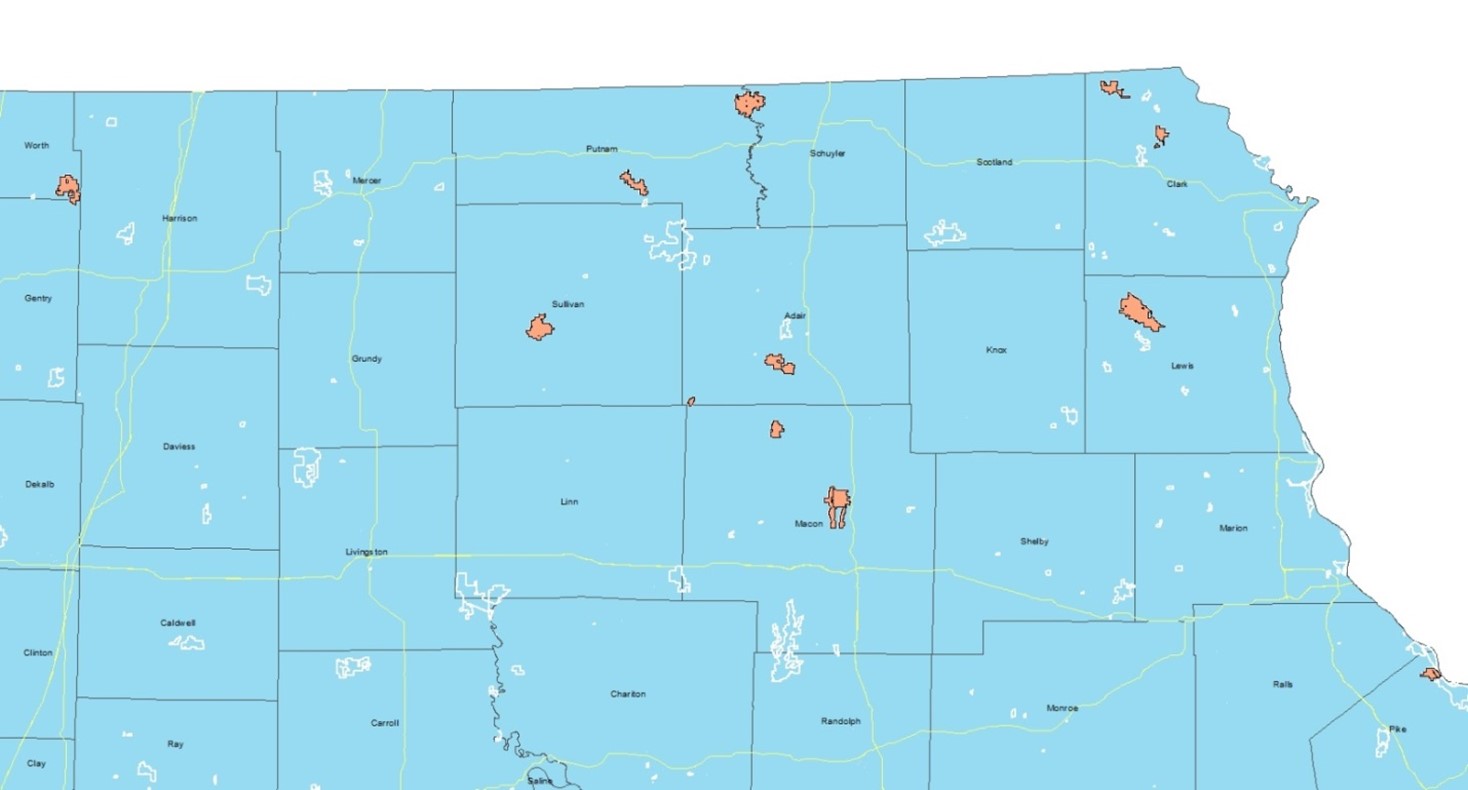 Conservation Areas in northern Missouri where Indiana bats have been documented between 2001 and 2017. Paired sites are outlined in the same color: Rebel’s Cove and Mineral Hills (Brown); Indian Hills and Atlanta (Orange); and Charlie Heath and Hidden Hollow (Blue).

Roosting and Foraging Ecology of Indiana Bats in Central Indiana 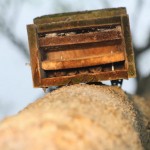 Indiana State University is in our 16th year of research at a mitigation site for Indiana bats (Myotis sodalis) near the Indianapolis International Airport in central Indiana. Bats and their habitat have been protected in this area since the Airport Authority and US Fish and Wildlife Service signed a Habitat Conservation Partnership in 1992. ISU’s contribution includes annual monitoring and study of the roosting and foraging ecology of Indiana bats using the Airport mitigation lands. A unique facet of this study is an investigation into the social behavior of Indiana bats by M.Sc. student Caroline Byrne. From 2013-2014, Caroline has used acoustics and video to record the social behaviors of Indiana bats at their roosts. This study has been funded by the Indianapolis Airport Authority, Indiana Academy of Science, and the Indiana Space Grant Consortium.

Just an hour south of the Airport project area, we are conducting a long-term study of use of managed forests by bats as part of the Hardwood Ecosystem Experiment being implemented by Purdue University, Indiana DNR, and others. For the past seven years, ISU has used mist netting and acoustic surveys to assess the bat community near harvest treatment sites. In 2012-2013, we partnered with Ball State University to radio track northern long-eared bats (Myotis septentrionalis) and Indiana bats to day roosts in the Yellowwood and Morgan-Monroe State Forests. In 2014, Ph.D. student Tim Divoll began an investigation into the foraging ecology of northern long-eared bats on these managed forests. Tim is using radio telemetry, insect trapping, and molecular analyses to gain a more comprehensive understanding of what bats eat and where they forage. Tim will be using similar techniques to understand the foraging ecology of Indiana bats on the Indianapolis Airport project. These studies are being funded by the Indianapolis Airport Authority and Indiana Department of Natural Resources.

James Cox, a M.S. student, is studying the distribution of bat in the Cumberland Gap National Historic Park, located at the junction of Kentucky, Virginia, and Tennessee. He is using mist net, acoustic, and telemetry to create species distribution models in the Park. This study is being funded by the National Park Service.

Distribution and Ecology of Bats in the Cherokee National Forest, TN 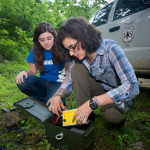 Vanessa Rojas, a Ph.D. candidate, is conducting a large-scale assessment of the distribution and ecology of bats on the Cherokee National Forest  in eastern Tennessee.  We are using acoustic (stationary and mobile) and mistnetting surveys to understand the landscape-scale factors that affect the presence of forest dwelling bats.  This study is being funded by the USDA Forest Service and the US Fish and Wildlife Service. 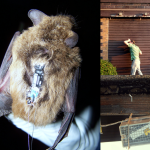 Scott Bergeson, an ISU PhD graduate, studied the impacts of climate change on Eastern North American bats, specifically the endangered Indiana bat (Myotis sodalis), and how these mammals may be able to avoid these impacts by altering their behavior. While it is believed that all eastern North American bats are in danger of population decline due to the impacts of climate change, it is predicted that these impacts will drive the endangered Indiana bat to close to extinction. This study was funded by the Indianapolis Airport Authority and the Indiana Space Grant Consortium. 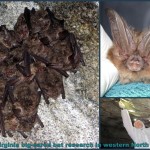 Joey Weber, a M.S. graduate, studied the ecology of a population of Virginia big-eared bats in western North Carolina. Until this study began in 2013, we had very little information on the whereabouts of this population in summer. However, in 2013, Joey tracked the bats from their hibernaculum on Grandfather Mountain to a primary maternity cave on Beech Mountain, NC. Joeyused advanced radio telemetry techniques to discover more about the migration routes and foraging areas used by these bats, which will aid in efforts to conserve critical habitat for the species. This study was funded by the North Carolina Department of Transportation. 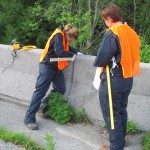 From 2011-2012, we conducted a study of eastern small-footed bats (Myotis leibii), which are rare across their range. These bats are so tiny (4–6 g) that, until recently, it has been virtually impossible to use radio telemetry to track them and little is known about their natural roosts. In the northeastern United States, eastern small-footed bat populations have declined significantly due to White-nose Syndrome (WNS), an emerging infectious disease that is causing local extinctions of cave-wintering bat species. The objective of this study was to study the roosting ecology of eastern small-footed bats, including locating and describing natural roosts, measuring bats’ movements, and measuring bats’ temperatures in their roost sites relative to ambient temperature. Tara Thomson completed the study for her M.Sc. thesis at ISU. This study was funded by the Tallassee Fund. 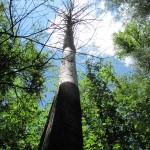 From 2009-2014, Dr. Joy O’Keefe partnered with the Joint Fire Sciences Program and USDA Forest Service to study the effects of prescribed fire on the roosting ecology of Indiana bats (Myotis sodalis). Frequent landscape-scale fires are important for restoration of pines and oaks, which were common in prehistoric forests, but little is known about the effects of large-scale prescribed burning on wildlife. Concerns about impacts to Indiana bats are a key factor in deciding when and where large-scale burns can be implemented in the southern Appalachian Mountains. Because Indiana bats primarily roost in conifer snags in this region, fire may indirectly benefit bats by restoring pine habitats and by creating new snags. However, we know very little about how prescribed fire affects existing snags and whether fire can create sufficient snags to replace those that are destroyed. The data from this study will inform management decisions and policy guidelines that balance the needs of Indiana bats with the needs of the fire-adapted ecosystem in which they exist. Kristina Hammond worked on this study as part of her M.Sc. thesis at ISU. This study was funded by the Joint Fire Sciences Program. See this USFS page for more information.

Bats of the Wabashiki, Vigo County, IN

Students in a Mammalogy class recorded acoustic calls from bats in the Wabashiki Fish and Wildlife Area in West Terre Haute, Indiana. The data from this 2011 survey were summarized in a report developed as a class assignment. Read this unpublished report Report on bats of the Wabashiki by ISU Mammalogy 2011!