DUBOIS — English students at Northeast Dubois High School got a crash course Monday on one way to apply Shakespeare to modern life.

Laura Bates, Indiana State University professor and author of “Shakespeare Saved My Life: Ten Years is Solitary with the Bard,” recounted her work teaching Shakespeare to prisoners in solitary confinement at supermax — the most secure — prisons.

In addition to the presentation to Northeast Dubois students, Bates held a community presentation at the Jasper Public Library Monday night.

Bates, who lives in Terre Haute, started volunteering in prisons in the 1980s when her husband, Allan, volunteered with a theater program for prisoners. In 1997, the couple moved to Terre Haute, and Bates got a job at ISU. At that time, the university held classes for prisoners at the Wabash Valley Correctional Facility, one of Indiana’s maximum security prisons, and Bates volunteered to teach them.

When the classes stopped, Bates continued to volunteer, eventually developing a Shakespeare program that she ran from 2000 to 2010 with prisoners in the solitary confinement unit. “Shakespeare Saved My Life: Ten Years is Solitary with the Bard” tells the story of that program.

“What (the prisoners) found was that they could relate to it,” Bates said of the program.

One of the prisoners she worked with, Larry, became a star student, and helped Bates develop workbooks to help his fellow prisoners learn the language of Shakespeare. In the forward, Larry wrote, “The bottom line is that studying Shakespeare is not exclusive to the degree-bearing members of our culture. If anything, it is of greater benefit to the uneducated, so-called ‘problem prisoners.’ Why? Because it is our story.”

Larry had been in and out of prison since he was 10 years old. At 17, he was part of a group convicted of a murder and given the death penalty. In exchange for his life, Larry agreed to life in prison without the possibly of parole and waived his right to ever file an appeal. He’s now 42.

Bates continued to follow up with Larry after the program, and she learned that his behavior in prison had turned around. Now, he’s getting ready to lead his own Shakespeare program for fellow prisoners.

One play the prisoners particularly related to, Bates said, was “Macbeth.” In the play, a Scottish nobleman named Macbeth murders his king and usurps the throne. In one scene, Macbeth has a vision of a dagger as he’s contemplating murdering the king.

Bates said the prisoners always realized that during his vision, Macbeth never shied away from the dagger, a clue to them that even though he insisted he didn’t want to kill the king, he really did. The prisoners also picked up on how easily Macbeth’s wife was able to sway his decisions and convince him to kill the king.

Often, Bates said, discussions of that play and others like it led the prisoners to reconsider their own actions.

For Larry, studying “Macbeth” led to a realization that the bad choices he’d made were because he didn’t know who he was himself, so he was trying to please the people around him. He realized that his choices hadn’t truly been his own, and that realization changed the way he saw himself and the control he had over his life path. It changed the way he behaved in prison, and he even told Bates that it saved his life. He’s convinced that without her class and the realizations it led him to, he would either have killed himself or done something in the prison to get himself placed on death row.

Bates ended her presentation with a call for the students to use their talents and passions to make a difference, particularly for people in prison and the families they leave behind, especially their children.

“It doesn’t have to be Shakespeare,” Bates told the students. “You can make a difference using what you love.” 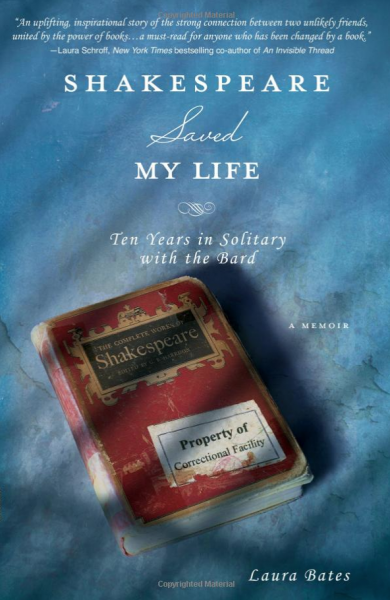