When a Lake Central High School class reunion was going to bring alumni Randy Noojin to Northwest Indiana, it offered him the opportunity to also perform in the region.

“I happened to be in town for a 40-year high school reunion around that time so we decided that since I’m going to be in the area, maybe this would be a time to do both shows,” said Noojin via phone from New York’s Upper West Side.

The “we” includes Paul and Angie Lowe, whom Noojin started learning about theater with when the couple ran Lake Central Theatre Guild in St. John and who now run L’arc en Ciel Theatre Group.

“They were our theater teachers. I did some musicals and some comedies with them and became a theater person with them,” said Noojin who continued his education at Indiana State University in Terre Haute where he earned a bachelor of arts in theater.

“I see the Lowes regularly. They come to New York. They’ve seen both the Woody Guthrie show and the Pete Seeger show at the New York International Fringe Festival when they premiered here.”

“It’s set at a 1940s union hall of striking mine workers. Woody Guthrie was a pro-labor, fair wages, safer working conditions advocate and he’s playing for a union meeting there, encouraging the mine workers to stick together in their strike for fair wages,” Noojin said.

“He uses his greatest songs to help convince them. A lot of people don’t know that Woody was a wonderful artist, a drawer and painter, and so the show uses projections of his artworks to help tell his story of searching for work in the Dust Bowl era.”

It was Noojin’s own activist nature that sparked him to write “Hard Travelin’ with Woody.”

“Occupy Wall Street was happening in New York with the subject of income inequality and I participated in some of those protests and decided that I was looking for a show to write for myself that would cover some things that I really believe in,” he said.

“Woody became a very obvious choice to create a show using his songs to be about income inequality now yet to look at it through the prism of the historical era.”

“‘Seeger’ is sort of a companion piece to the Woody piece. They were friends and Pete Seeger also used his music for activism so I’ve set the Pete Seeger show at a benefit concert advocating the end of the U.S.-Cuba trade embargo, which is a problem that is still around today,” Noojin said.

“It also allows me to talk about Pete’s politics. He was accused of being Communist so Pete tells the story of his fight during the McCarthy era with the blacklist. Pete was not allowed to sing on radio or television because of his political beliefs.

“We use some of Pete’s songs like ‘If I Had a Hammer’ and ‘Turn! Turn! Turn!,’ his most famous songs, to tell his story about his awakening as an activist. I discovered during the writing of it that it really resonates with issues of today such as Black Lives Matter and Pete was a very early environmentalist.”

Despite appearing on TV shows such as “Boardwalk Empire” and “Royal Pains” and having the feature film “Unbeatable Harold” be based on his play, Noojin (www.randynoojin.com) said what he enjoys most is getting his solo shows written and on the road.

“It’s really become a large part of my livelihood. It has empowered me as an actor — to be able to write, to do my own work and to let it be meaningful to me rather than just being hired to act in other people’s projects,” he said.

“It’s allowed me to be somewhat of an activist through storytelling about these great activists that I’m portraying. It gives me a chance for my acting work to help be more meaningful to me.” 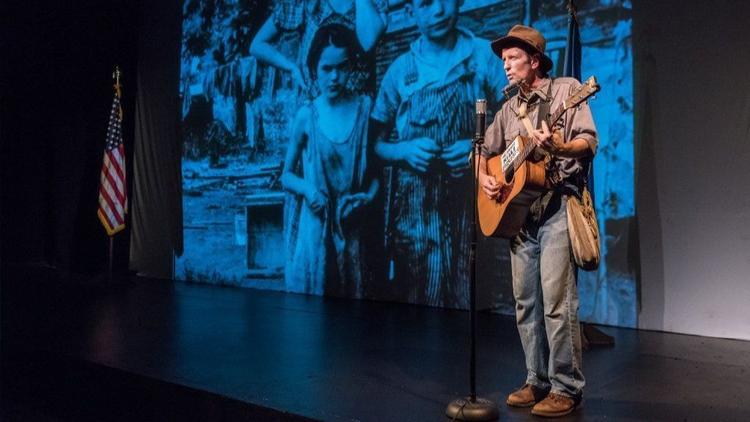