Edith Acton of the Wabash Valley Art Guild is the group’s featured artist this month at the Vigo County Public Library.

A collection of her fused-glass works are on exhibit through Sept. 30 as part of WVAG’s Artist of the Month series.

Holding a master of arts degree from Indiana State University, Acton has long been an artist and has experience working in various media. However, her focus during the last 14 years has been specifically in fused glass. Over these years, she has been actively involved in the Wabash Valley arts community.

Acton’s art spans a vast variety of subject matter. However, she feels nature in a broad sense is her primary source of inspiration.

Frequent travels along with her husband gives Acton exposure to beautiful sceneries, which eventually make their way into her fused-glass expressions.

One of the signature traits of Acton’s art is the use and treatment of brilliant hues. She said she is highly influenced by the color schemes she comes across in the world, and that she enjoys incorporating them into her works.

While there are interesting stories behind many of Acton’s works, there is one particular piece in the current library exhibit that stems from a unique source of inspiration. Acton said that during a visit to a cardiac unit at a hospital, it occurred to her that the heart is a beautiful organ, and that its beauty must be depicted in her next artistic creation. This resulted in the fused-glass wall-hanging piece “Heart.”

Acton also has works on display in the Terre Haute Savings Bank at 25th and Poplar streets. She is among the well-established artists of the region, with her art having been featured in many prominent shows and locations including Arts Illiana, Clabber Girl gallery, Community Theatre of Terre Haute, Country Club of Terre Haute and several galleries in Illinois. In addition to WVAG, Acton also is a member of River City Art Association and an associate member of Covered Bridge Art Association in Rockville. 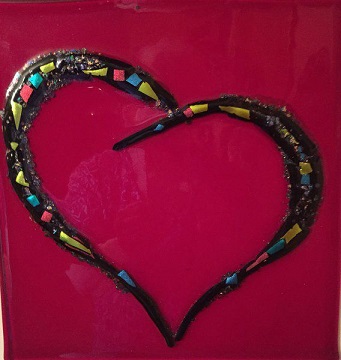