Though in their 90s, couple still involved with Ward Corp.

Vern and Marion Ward have been side by side in marriage for 70 years, and they've been partners in business for 54 of them.

“It's really worked out pretty well,” said Vern Ward, 92, sitting at his kitchen table this summer, wearing an impeccably pressed white shirt, gray slacks and gold cuff links. Marion, who is 91, sat across the table, neatly coiffed, wearing a linen jacket and slacks, and nodding her approval.

While they may not go to the office every day, the couple continue to have a hand in the operation of Ward Corp., a Fort Wayne metals engineering and casting company.

The Wards met at a Steak 'n Shake when Marion was a pre-med student at Indiana State University in Terre Haute. “When we met he said, 'I'm going to marry you,'” she recalls. Two years later, on Aug. 21, 1948, they married and made their home in Fort Wayne.

“I didn't become a pediatrician, but I did have five children, so that's close,” she smiled.

After majoring in math, science and drafting in college, Vern spent time as a teacher at Hillcrest School in Fort Wayne while helping in Marion's father's aluminum pattern-cutting business. When her father decided to retire, both Vern and Marion stepped in and on Vern's 38th birthday, May 18, 1964, they opened Ward Pattern and Engineering Co. The small shop on Growth Avenue in Fort Wayne had three employees working on 1,500 square feet of space.

Mary Jo Atkins, the youngest of the couple's five children, remembers the early days of the business when her mother kept a hot plate and a coffee pot in a corner of the workspace.

“I really grew up there,” she said. In fact, she learned a few life lessons playing there.

“There was just no day care available so my cousin would come and stay with us at the office while his mother worked as a nurse.”

The two were playing together and Atkins said she insisted that her cousin, who was 10 months younger, would not be the driver of the car they were pretending to operate. To start the “car,” Atkins said she inserted a real car key into an electrical socket under a desk. “I'm lucky I didn't get electrocuted, but I did knock out power to the building and all the machines shut down.”

Ward Corp. has been a family business since its beginning. According to Vern, at one time about 13 of his family members worked there, along with family members of employees. Even Marion's grandmother had a hand in the early days of the business, working as bookkeeper. Atkins remembers learning about the business under her supervision.

“I started off stamping time cards for the employees,” she said.

Son Chris recalls going to work in the business when he was about 10 years old.

“I would sweep the floors and clean the light fixtures. A foundry is a dirty place so there was a lot to clean,” said Chris, who remembers when he had to take more responsibility. It was July 4, 1978.

“I was working in the pattern shop and they told me I was going to have to come in on the holiday to run the furnaces. So, I cut my festivities short and went in and ran the furnaces. By Monday I was in charge of the furnaces,” he added.

Vern noted that some of the earliest employees now have children working for the company.

“Our plant manager, JR Hicks, came to work with us when he was 16. His father worked for us too,” Vern said. “We had employees who spent 25 and 30 years with us and have retired.”

Over the years the tiny aluminum pattern shop grew. In 1969, Marion's brother Gail Cole started the aluminum foundry to produce prototypes and castings for the aerospace and automobile industries.

In 1978, Ward Aluminum Casting Inc. grew to 40 employees with 15,000 square feet of space in the same building where the business began with 1,500 square feet. Gradually the expansion of the business meant buying the entire 120,000-square-foot building where they started their business. What was once Wayne Knitting Mills became Ward Corp., housing three divisions of the company. A fourth division, Ward Heat Treating, is on Opportunity Drive in Fort Wayne.

“Our businesses are on Growth and Opportunity,” said Marion, referring to their street locations.

When they started their business in 1964, customers were sometimes surprised to learn that the owners were a bit nontraditional.

Marion was the president and Vern was chief executive officer.

Marion recalled a phone conversation when the caller was not happy with the answer she gave. “He asked to speak to the president of the company. He was very surprised when I told him I was the president.”

The couple are grateful for the solid customer base that grew into a strong circle of friends over the years.

“When you get this old,” Vern said, “a lot of those people are gone. But we have had many good customers who taught us how to serve them better.”

The last five decades have not been all work and no play.

“The boys and I belonged to Indian Guides and we did a lot of fishing and hunting together,” Vern Ward said. He also coached his boys in baseball.

Both Vern and Marion were involved in the Jaycees and the Jaycee wives and were Sunday school teachers at First Presbyterian Church in Fort Wayne.

When their daughters started raising show dogs, the couple took to the road with their champion Weimaraners and basenjis.

“We traveled to Philadelphia and Denver and New York City with the girls and the dogs,” Vern said.

It was during one of those trips that someone thought Marion was Katharine Hepburn and asked for an autograph.

Even though they are aging and experiencing occasional health issues, the couple remain involved in the everyday operation of Ward Corp. Vern had a stroke in 1998 and heart surgery in 2007. Marion, whose vision has been impaired by macular degeneration, recently fell and broke her hip and arm, requiring surgery and rehabilitation.

But the two stay in touch with company employees by sending gifts throughout the year and hosting company meetings at their Pine Valley home, affectionately referred to as “the big house.”

Marion's philosophy is “if you rest, you rust.”

JANET PATTERSON | For The Journal Gazette 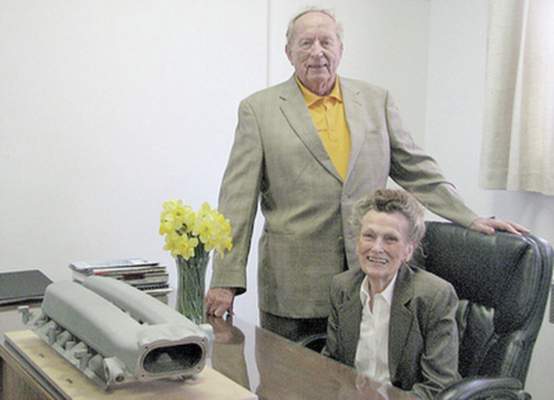