Public May Not Trust Higher Ed, but Employers Do

A new survey reveals that not only do business executives value college, they want students with skills associated with the liberal arts.

Though public support for higher education seems to be waning, this skepticism doesn’t appear to extend to potential employers, who say they still have faith in colleges and universities, according to a new survey conducted on behalf of the Association of American Colleges & Universities.

But while executives and hiring managers believe that institutions are teaching graduates the skills needed for entry-level jobs, they reported that students usually aren’t ready to be promoted.

AAC&U commissioned the Washington, D.C.-based Hart Research Associates to survey two groups: 500 or so business executives in the private sector, and 500 managers whose duties include recruiting and hiring new employees.

But the new AAC&U survey shows that 82 percent of executives and 75 percent of managers think completing a college education is “very important” or “absolutely essential.”

The association titled the report “Fulfilling the American Dream: Liberal Education and the Future of Work,” because it was mindful of the worries the public has about higher education, said AAC&U president Lynn Pasquerella.

“We want to restore our public trust in higher education and liberal education in particular,” Pasquerella said in an interview. “We can’t do that unless we address their concerns.”

"When we talk about the liberal education, it’s often in terms of lifelong learning and preparing students not only for their first job, but for their last job," Pasquerella said.

Also notable in the findings: business leaders appear to value more generalized skills, ones that aren’t specific to certain majors. The general public has soured on the concept of a liberal arts education, which AAC&U has expressed concerns about in the past.

In a joint statement with the American Association of University Professors in May, AAC&U extolled the value of liberal arts: “The disciplines of the liberal arts -- and the overall benefit of a liberal education -- are exemplary in this regard, for they foster intellectual curiosity about questions that will never be definitively settled -- questions about justice, about community, about politics and culture, about difference in every sense of the word,” the statement reads. “All college students and not solely a privileged few should have opportunities to address such questions as a critical part of their educational experience.”

A couple of the skills that both parties valued the most: effective oral communication and critical thinking.

Those surveyed indicated they’d be much more likely to hire a student with an internship or an apprenticeship -- often where students learn some of these generalized skills.

Pasquerella also said institutions should be mindful of the continued and growing economic segregation in higher education, and ensure that underserved students are being reached with these types of opportunities.

“It underscores the importance of providing the opportunity to engage in high-impact practices and real-world experiences,” she said. 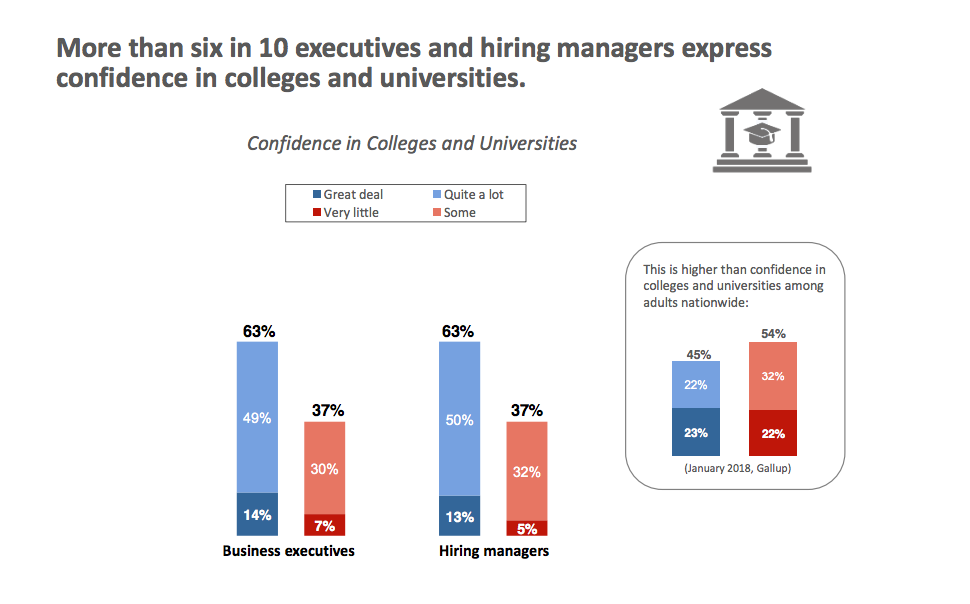