CHARLOTTESVILLE — Look closely at the careers of the world’s renowned doctors, lawyers and others who have found great success in their professional pursuits, and you’ll find more often than not that music impacted their life in some way, said music teacher Randy Adams. That’s why he loves what he does, spreading that joy and giving fulfilling musical experiences to others.

Adams, a 16-year music teaching veteran, was recently hired as a new music teacher for Eastern Hancock Schools. Principal Dave Pfaff said he knows Adams will be able to push his students to their full potential in the coming years, and he hopes to see an increase in the size and quality of the school’s bands in the coming years.

Adams graduated from Peabody Conservatory in Baltimore, where he received his bachelor’s degree in music education, along with a performer’s certificate as a trombone player. He later attained his Master’s from Indiana State University in 2002, after which he spent several years teaching band, orchestras and even choirs in various school around the country.

It’s good to be back in Indiana, working in a community with an outstanding collection of students and staff, Adams said.

Pfaff said when he hired Adams, he asked the band and orchestra teaching veteran what his secret was in bolstering a school’s music program.

“He told me, ‘I’ll get your best kids in the building into the band,’” Pfaff said. “And that’s how a band grows, by producing a quality product.”

“He’s a great man,” Pfaff said. “And he has a background in music that is tremendous.”

The music programs that already exist at Eastern Hancock are fantastic, Adams said. Dan Buckalew, Eastern’s former band director, did an outstanding job in building a strong foundation for a successful team of musicians.

“The kids are outstanding,” he said. “Not only are they smart and focused, but they’re responsive. They’re the best kids I’ve ever worked with, really.”

There’s nothing there to fix, he added. Adams said he only wishes to incorporate his own character on the program to hopefully make a positive influence. Some of his long-term goals include inspiring Eastern students to continue their musical life after they leave school, he said.

He hopes that some of his more talented students will seek out a future in honor bands in their college years, or perhaps they’ll find a spot in a local group like Brandywine Winds, he said.

“I’d like to transfer that grand philosophy over to my kids.” 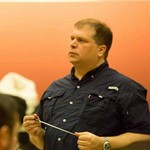