Is This the Hardest Course in the Humanities?

For most of my professional life, the future of the humanities was a conceptual matter. That’s no longer the case. When enrollments are down, majors are down, funding and jobs are down, adjuncts are up, and departments are being closed, abstract debates over which new theory or interdisciplinary vision is on the rise don’t much count. When a formation as renowned as the Humanities Center at the Johns Hopkins University is proposed for shutdown (it later was saved in modified form), we know that the prosperity of the humanities doesn’t rest with people at the top.

No, it depends on the people at the bottom, undergraduates who vote with their feet. If an English department’s chairman tells the dean, "We’ve got to hire someone in this new area of ____," the dean replies, "But you can’t even get your existing courses half-filled." If, however, a parent calls and grumbles, "I’m paying lots of money, and my daughter can’t get into any of the English classes she wants," well, that calls for action.

It’s a situation that few humanities professors are equipped to overcome. Graduate school and assistant professorships don’t impel you to attract freshmen and sophomores. Instead you learn how to impress senior professors. But right now, nothing is more crucial than the preferences of 19-year-olds.

And as humanities enrollments have slipped, in some places precipitously, instructors have felt pressure to make their courses more relevant and less rigorous. The typical student searching for a course of study won’t be attracted by syllabi filled with old plays and 400 pages of reading each week. Contemporary and multicultural materials, more media, less reading and fewer writing assignments, and definitely no poetry — that’s the prescription for building enrollments.

Nothing could be further from it than what W.H. Auden did at the University of Michigan in 1941. Auden had left England in 1939 and became for a time a visiting professor at Ann Arbor. He called his course "Fate and the Individual in European Literature," a timely theme in the days of mass killing and existentialist moods. Its syllabus resurfaced a few years ago and provoked much commentary on its mass of 6,000 pages of the most powerful and challenging literature in the canon: The Divine Comedy in full, four Shakespeares, Pascal’s Pensées, Horace’s odes, Volpone, Racine, Kierkegaard’s Fear and Trembling, Moby-Dick, The Brothers Karamazov, Faust, Baudelaire and Rimbaud, Kafka, Rilke, T.S. Eliot. Auden even included nine operas. Opera in the 1940s was a popular art form, with millions of people tuning in each week to the Met’s Saturday broadcast, but it’s hard to imagine anything less consonant with millennials’ attention span than one of Wagner’s Teutonic enormities. Auden assigned three of them.

We don’t have any records of the student response to Auden’s course, but we can be sure that a reading list like that one would repel 21st-century undergraduates. Even those few who look for Great Books programs might be put off by the workload. Columbia’s famous "Literature Humanities" course has a distinguished reputation, but the syllabus doesn’t have nearly the reading load of the Auden course. Also, it’s a requirement at Columbia, as is the Core at the University of Chicago. Any Auden-like course today would have to be voluntary; otherwise it might chase away applicants and annoy faculty members who prize student choice. One would think it couldn’t survive anywhere once the ghosts of Trilling and Barzun, or Robert Maynard Hutchins and Mortimer Adler, had departed, and certainly not in the provinces. "Where on earth today would one find institutions or teachers or students so audacious as to attempt something similar?"

That question, in fact, appears on the syllabus of LTRS 3803, the first part of the two-semester, team-taught course at the University of Oklahoma that goes against all the conventional wisdom. It’s modeled on Auden’s course, with a few changes. The instructors — Kyle Harper, a classicist and the university’s provost; the historian Wilfred McClay; and David Anderson, a professor of English — have spread it out over an entire year, and they’ve excised a few books (Dante’s Paradiso, Baudelaire and Rimbaud, Kafka). But they added The Odyssey, The Aeneid, Beowulf, Sir Gawain and the Green Knight, Paradise Lost, Robinson Crusoe, Pride and Prejudice, Nietzsche, Invisible Man, and other 20th-century masterpieces such as Derek Walcott’s neo-Homeric epic Omeros. They dropped most of the operas but kept Don Giovanni and Wagner’s Tristan und Isolde. They speak frankly in the course description of taking "delight in the Western canon" and hold fast to themes of little currency in the research world: destiny, God and "the gods," a meaningful life, authority.

When enrollment opened last semester, the unexpected happened. The course filled up within minutes. Harper had already warned his students, "This is the hardest class you will ever take." The syllabus was posted online in advance, so that students knew exactly what they were getting into. The course meets a general-education requirement at Oklahoma, but so do many other courses with half the workload. To accommodate the unexpected demand, the class was expanded from 22 to 30 students, the maximum number that the assigned classroom could hold.

I sat in on a class in October. McClay lectured on Inferno. The atmosphere was genial but focused. You can tell after five minutes whether a class has an esprit de corps — no sullen faces, no eyes drifting to windows and cellphones, even the bad jokes get a laugh. McClay slid from Augustine to Bonaventura to Jesus, Jonah, Exodus, and the prodigal son before taking up Paolo and Francesca, and then the suicides, sodomites, murderers, and frauds in Dante’s torture zones.

After class, about half of the students and I headed over to the dining room at Dunham College, one of Oklahoma’s graceful new residential colleges, for lunch. There, without the professors present, I asked the key question: Why did they sign up for Western-civ boot camp?

One fellow grumbled that he had to do three times as much work as he did in his other classes. The rest nodded. But you could hear in his words the self-respect that comes from doing more work than the norm, from climbing the highest hill while your peers dog it. Another student said that the page-count of the syllabus had flattered her, that it showed the professors respected her enough to demand that she take on a heavy load of historic literature. "This is what I came to college for," another said. One more chimed in, "This class is changing my life."

They acknowledged, too, the distinctiveness of the works they read, one student calling them a "foundation" for things they study elsewhere. They admired the professors, to be sure, but the real draw was the material. When I asked what they would change about the course, they went straight to the books: add The Iliad and some of the Bible.

Their attitude was enlivening. But the only thing that really matters is enrollment. "Will you sign up for next semester’s course?" I asked. "Definitely," they replied, all of them. (This semester has 32 students enrolled, more than the original cap of 22 because many more petitioned to get in.)

This is now the measure of success for the humanities. Do undergraduates want to come? The material decline of the humanities has made theoretical and political debates secondary, if not irrelevant. Recovery and survival must start from the base.

The Auden-based course at Oklahoma is a small but significant instance of how it may be done. Western-canon talk offends many people in the humanities these days, the few faculty traditionalists often contesting the progressive orthodoxy. But 30 years ago, when the Eurocentrism-versus-multiculturalism debate became a national story, nothing much changed within the departments. The trend toward contemporary, "nontraditional," and "relevant" readings continued.

I advise the traditionalists to try the Oklahoma way. Design your Western-civ or Great Books course and ramp it up to Auden levels. Be frank about the reading challenge. Boast of the aged, uncontemporary nature of the materials. Highlight the old-fashioned themes of greatness, heroism and villainy, love and betrayal, God and Truth, and say nothing against intersectionality and other currencies. Your antagonists are mediocrity, youth culture, presentism, and the disengagement of professors and students. You occupy a competitive terrain, and your brand is Achilles, Narcissus, the Wyf of Bath, Isolde, and Bigger. Let’s see what happens. Let the undergrads decide. 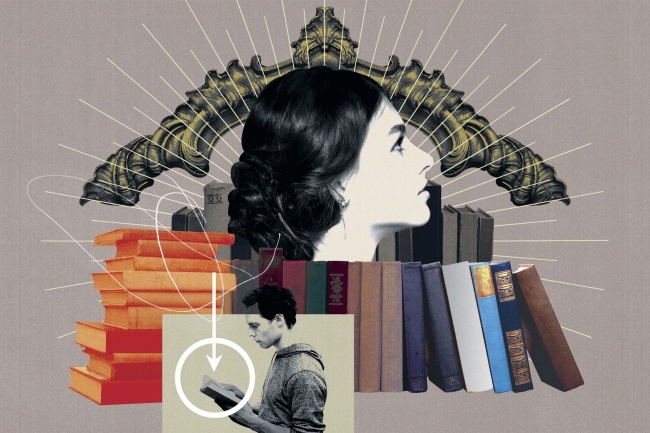