Globes make the world seem smaller, almost like a vast neighborhood. Antarctica sits just inches away from Terre Haute. One spin takes you to Europe, Africa or Asia.

Dorothy Drummond met people all over this sphere we call Earth, traveling to more than 80 countries. She didn’t keep those experiences to herself. Dorothy shared them with thousands through her teaching, writing and advocacy for geography literacy and hunger relief.

She wanted folks, young and old, to understand their surroundings and those of people thousands of miles away.

That conversation five years ago was one of many I had with Dorothy through the years — several at church, others by chance at a store or restaurant, and some in my role as a columnist.

Almost all of those talks centered on the interests and needs of others. When she died at age 89 last Friday during her latest travels in China, the loss was felt in many places, especially Dorothy’s home community of Terre Haute.

Nineteenth-century composer Franz Schubert wrote that powerful piece of music. Schubert hailed from Austria, a European country bordered by the Czech Republic, Slovakia, Hungary, Slovenia, Italy, Liechtenstein, Switzerland and Germany. Dorothy would know that, and would want others to know that, too. She’s a big reason that geography regained some of its lost emphasis in Hoosier education.

Geography was a passion for her. She taught it at Saint Mary-of-the-Woods College and Indiana State University from the 1960s to the ‘90s. She wrote and co-wrote four world cultures textbooks. Her 2002 book “Holy Land, Whose Land? Modern Dilemma, Ancient Roots” sold more than 17,000 copies worldwide. She visited Israel five times, as well as several surrounding Middle Eastern countries. Dorothy served as president of the National Council for Geographic Education, and received that organization’s lifetime achievement award for her efforts to “further geographic education in Indiana and around the world through her organized travel opportunities, writing and philanthropic work.”

Those efforts include co-founding the Geography Educators Network of Indiana (or GENI) in 1983, along with other Hoosier instructors.

That grassroots initiative made a difference. Geography’s status as a distinct discipline in schools diminished from the 1930s through the ‘70s, Dorothy explained in that 2013 interview. Students’ lack of awareness of the world’s physical features and their relevance showed and that problem continued into their adulthood. In the ‘80s, a National Geographic Society survey found the average American could identify fewer than 6 of 10 U.S. states and fewer than 3 in 10 could read a map.

“They had no sense of place, and people were aware that geography wasn’t being taught,” Dorothy explained. “And that was the impetus for the creation of GENI.”

Dorothy wrote grants that helped nearly 1,000 Indiana teachers attend summer geography workshops at The Woods. She organized and led affordable geography tours of distant lands for Wabash Valley teachers. The educators got to see the countries in their classroom lessons, ate the food and met the locals. If they encountered a farmer on a back road, she’d talk with him.

“The next thing you know, we’d be up at his house and his wife would be cooking us dinner,” Gloria Wilson, a former Farrington Grove Elementary School teacher said in that 2013 story.

Dorothy’s care for people around the globe became part of her Terre Haute story, too. In 2014, she helped found a local chapter of Bread for the World, a group aiming to convey to Indiana members of Congress the importance of hunger relief efforts. Twenty Wabash Valley churches, the Sisters of Providence and others joined the cause. They gather for an “offering of letters,” write messages to the local lawmakers, urging them to fund aid to hungry people at home and abroad, and then hand deliver those letters to the officials.

One in 9 people worldwide face chronic hunger. It’s a life-or-death matter for some.

In travels to dozens and dozens of countries, Dorothy undoubtedly saw that human problem.

Her interest in geography emerged early. As a high school girl, she — like millions of other Americans — studied the places affected by World War II. “I remember following all the battles,” she said in 2013. “I had maps all over the room, and a globe. It was important to me.”

And because a sense of place was so important to her, many other people understand their world a little better today. 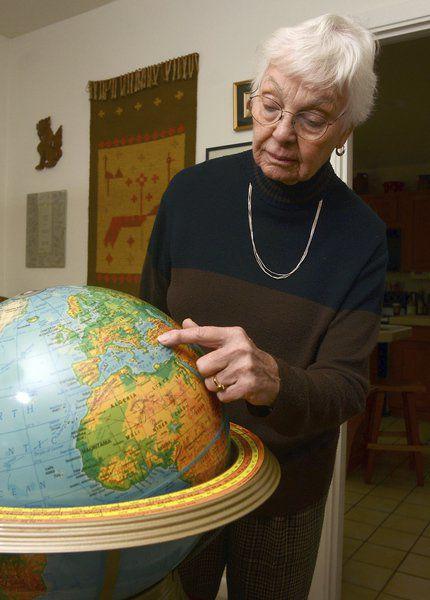