North Montgomery High School and Northrdige Middle School Director of Bands Andy Simpkins is the recent recipient of a collection of band music penned by the prolific arranger Dr. Bill Moffit, a former director of the Purdue University “All-American” Marching Band. Included in the collection, which has a retail value of $26,419.61, are 408 copies of 78 titles that were published in Moffit’s SOUNDPOWER Series. They are distributed from the assets of the Music Arrangement Trust, established by Moffit and Linden resident Mark Eutsler in 1988. Eutsler and Therese, his wife, now administer the trust.

“Mr. Simpkins consistently demonstrates exemplary character in teaching, musicianship and integrity,” Eutsler said. “This collection of music contains multiple copies of several titles and his willingness to give the extra copies to other directors in Montgomery County as well as his colleagues throughout the state is a testament to his altruistic and collaborative spirit in serving the music education profession.”

Simpkins and Eutsler are Indiana State University music education alumni. For a decade in the 1970s, Moffit was guest clinician at the ISU Marching Band Workshop for a week each summer.

Since it was established in 1988, the MAT has provided music to directors and cultural agencies around the world. It was recognized with a Reception of Honor at the House of Composers Palace in St. Petersburg Russia, after it distributed music on a trip across Russia aboard the Trans Siberia Express in 1994.

Moffit, who was named Indiana Music Arranger Laureate by the Indiana State Legislature in 1988, passed away in 2008. He arranged more than 450 titles released by Hal Leonard Publishing Co. that have sold to date in excess of 1 million copies. 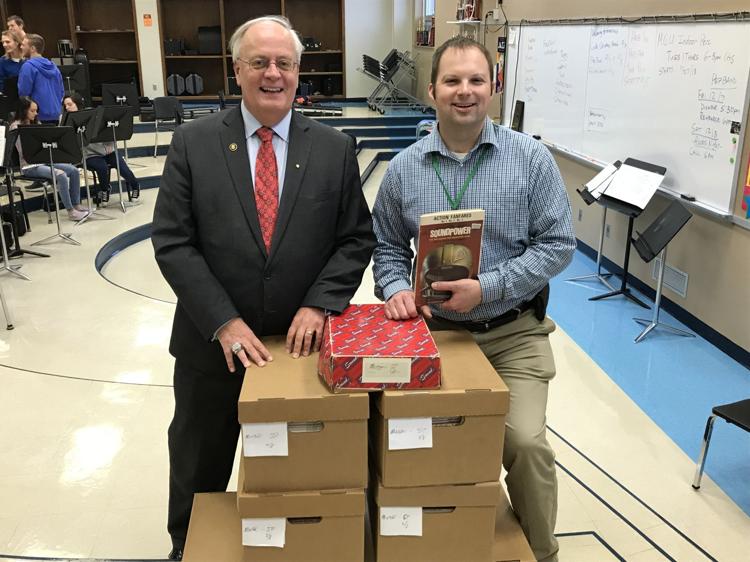