Putnamville, IN - Indiana State Police Superintendent Douglas G. Carter has announced the promotion of Master Trooper Matthew Ames to the rank of Sergeant.

Ames will serve as the Putnamville District Public Information Officer.

He was the successful candidate of a promotion process that included a written test, an oral interview and a culmination of seniority, education and overall job performance. The Putnamville District is made up of Vermillion, Parke, Putnam, Vigo, Clay and Sullivan Counties. Sergeant Ames' predecessor, Sergeant Joe Watts, recently retired from the Indiana State Police.

Ames is a resident of Vigo County and has been married to his wife Cathy for 25 years, they have two children.

He is a native of Clay City Indiana and a 1989 graduate of Clay City High School. He went on to receive a Bachelor Degree in Criminology from Indiana State University in 1993. He graduated from the Indiana State Police Academy in 1995 and was subsequently assigned to the Lafayette District.

In 1998, Ames had the opportunity to transfer to the Terre Haute District where he patrolled from 1998 until 2008. His most recent duty assignment is to the Department's Commercial Vehicle Enforcement Division where he has served since 2008. During his career Ames has been a member of the Tactical Intervention Platoon as well as a member of the Underwater Search and Rescue Team (SCUBA).

Ames is a retired Master Sergeant from the Indiana National Guard where he received a Bronze Star for his actions while serving in Iraq in 2006.

Sergeant Ames' new duties will include the coordination of public education programs and to serve as the Department’s news media liaison on public safety, crime prevention and law enforcement public interest issues.  He will also be available to present public safety and informational programs to community and service organizations. 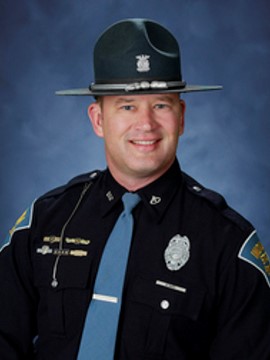