CHARLOTTESVILLE — Eastern Hancock has begun a search for a new high school principal.

Leaders and former students alike say Dave Pfaff will be difficult to replace. Pfaff, 63, is set to retire at the end of the 2018-19 school year, after more than 20 years of serving as the principal at Eastern Hancock High School. He also has been principal at EH Middle School.

Pfaff dedicated his entire teaching and coaching career to Eastern Hancock schools. He was named acting principal in August 1997, after the former principal Richard Trapp resigned suddenly to take another job, according to Daily Reporter archives. At the time he was promoted, Pfaff was six hours short of obtaining his administrative license at Indiana University.

Pfaff did not immediately return calls or email requesting comments regarding his retirement.

Former students said Pfaff was supportive both during his time as a teacher and later as an administrator.

“Amazing man,” she said. “He believed in me when I couldn’t believe in myself.”

Stacy Goodpasture, who graduated from Eastern Hancock in 1996, reminisced in a Facebook post about the ‘Certificates of Greatness’ she received from the then-history teacher for good test scores. The seal on the hand-drawn awards was a bologna-and-cheese sandwich and a Big K cola, she remembered. His sense of humor made his classes enjoyable, she said.

She said she hopes he enjoys his well-earned retirement.

“Mr. Pfaff is an amazing history teacher and principal,” she said. “He made learning interesting and fun.”

“His wisdom, moral integrity and compassion have created a school system second to none,” she said.

Eastern Hancock Superintendent Vicki McGuire said she would begin advertising for the position this week and would put together a hiring committee consisting of herself, Pfaff, board members, teachers and a representative from the local teachers’ association.

“That will give us a good perspective on who we want to take Dave’s place,” McGuire said. “It’s tough when you have someone who’s been in the position that long. It can be hard for the next person to be successful.”

She said Pfaff will be very involved in the hiring process for the new principal and will be available to help during the transition process as well.

McGuire has worked with Pfaff for three years and was impressed by his unassuming leadership style from day one.

“He truly practices servant leadership and puts his staff and students before himself,” she said. “Mr. Pfaff has never been about recognition but about what he can do to encourage students through academics and life lessons.”

She said the principal will be truly missed.

“We love you and thank you for everything,” he said. “We hope we can find somebody like you.” 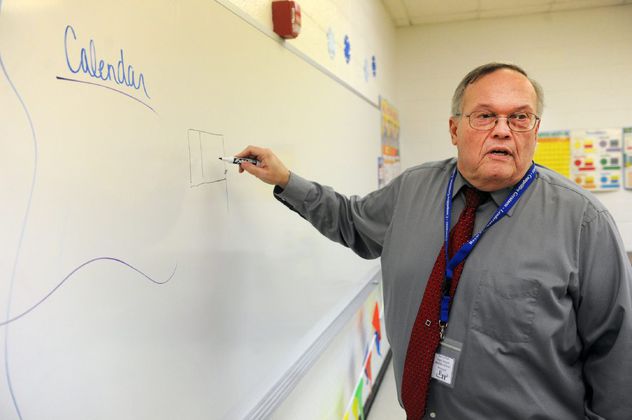