The introduction of the 1956 edition of the “Green Book” explained the publication’s necessity with subtle wording.

It aimed to give the African-American traveler “information that will keep him from running into difficulties, embarrassments and to make his trips more enjoyable.”

“Green Book” also is the title of a new movie, depicting an African-American jazz trio leader touring the country with a white Italian-American bouncer-turned-driver from New York. The unlikely pair relies on the “Green Book” to navigate the South in the early 1960s.

The post-World War II years are nostalgically remembered as the “golden age of travel,” when Americans’ love affair with automobiles led millions to hit the open road. “But for people of color, [travel] could be a real problem,” said Ann Chirhart, an Indiana State University history professor who’s researched civil rights and African-American issues for years.

The “Green Book” was “really necessary because African-Americans faced all kinds of dangers,” Chirhart added. “There were places where they could literally be killed.”

Just for walking in the front door of the wrong diner. Or trying to use a service station’s restroom. Some businesses in the South hung overt “whites only” signs in their windows. “Sundown towns” warned African-American visitors to leave before dark. In other places across the United States, segregated practices were known by tradition and word of mouth.

“‘Green Books’ helped convey that unspoken message to travelers who would not have known the social boundaries of a community in a state like Indiana,” stated Brad Miller, director of Indiana Landmarks Northwest Field Office who wrote a 2017 piece for the preservation organization about some “Green Book” recommended places in the Hoosier state. Yes, even in Northern states like Indiana, African-Americans faced entrenched racism. The book listed two safe spots in Terre Haute — the Booker Hotel and Dreamland Cafe, both on Cherry Street.

The new film, based on the true story of Jamaican-American pianist Don Shirley (played by Oscar winner Mahershala Ali) and his rugged driver Tony “Lip” Vallelonga (portrayed by Viggo Mortensen), is set in the Deep South. Yet, the actual “Green Book” travel guide included listings for all lower 48 states. “Safe spots” often were black-owned businesses. Complete safety from prejudice in any place was never guaranteed, though.

Hatton graduated in 2002 from Indiana State University, where he studied radio, television and film and worked as a photographer for WTHI-TV. Now 40, Hatton lives with his wife and three kids in Los Angeles, where he’s worked as an independent film producer and actor. He’d begged one of the “Green Book” screenwriters, Nick Vallelonga (Tony’s son), for a part in the film, without success, until Vallelonga remembered that Hatton played bass guitar in his high school and college days, including at several Terre Haute bars in the 1990s and early 2000s.

The producers needed an actor who could play upright bass, a huge acoustic instrument that differed from the electric basses Hatton played. He knew enough, though, to get the part, and then trained on upright for two months before filming began.

“As an actor, you have to have a bag of tricks” to get roles, Hatton explained by phone last week from Los Angeles.

He also studied the background of the African-American traveler’s guide for which the movie is named.

The film follows Shirley, Tony Vallelonga and the trio on an eight-week tour of the South. It pairs Shirley, a highly educated black classical musician fluent in eight languages, with Vallelonga, an uneducated New York City nightclub bouncer. Their backgrounds lead to clashes, but eventually the rough-edged Vallelonga challenges the duplicitous treatment Southern whites give the black pianist — applauding him while on stage, shunning and threatening him off it.

“And that’s really the message of ‘Green Book,’” he added, “to look at what’s underneath the surface and just look as humans and say, ‘Yeah, maybe we have more in common and should not judge each other by our appearance and backgrounds and ethnicity.’”

Hatton’s performance as a bass player determined to “partake in all the festivities of being a touring musician” has gotten good marks, too. The role “is nothing like me,” he said, laughing. “I have a wife and three kids and been married for 10 years. It’s fun to pretend when the camera’s on, but it’s definitely acting.”

Still, his portrayal adds to the crux of the “Green Book” story. In one scene, bassist George Dyer and others are socializing with a group of girls by a pool. Tony, the driver, stands on a balcony, watching them. Off in the distance, Don Shirley, the star of the trio, stands alone.

Shirley actually brought his trio to Terre Haute in the 1960s. They played Tilson Auditorium on March 6, 1968, and then returned exactly one year later in 1969. A Terre Haute Tribune preview of the trio’s 1969 concert describes Shirley as “a brilliant artist and exciting personality whose musical curiosity combines with a gift of creativity to make him outstanding in his field.”

His story is told on the big screen with a mix of comedy and drama.

“There are moments where [the movie is] extremely fun, and then it’s juxtaposed with some dark, terrible moments that we should as humans all be ashamed of,” Hatton said. “We should be ashamed of things that took place during segregation. And this is a movie that’s a very poignant reminder that we have come a long way, but we still have more work to do. We still need to get better.” 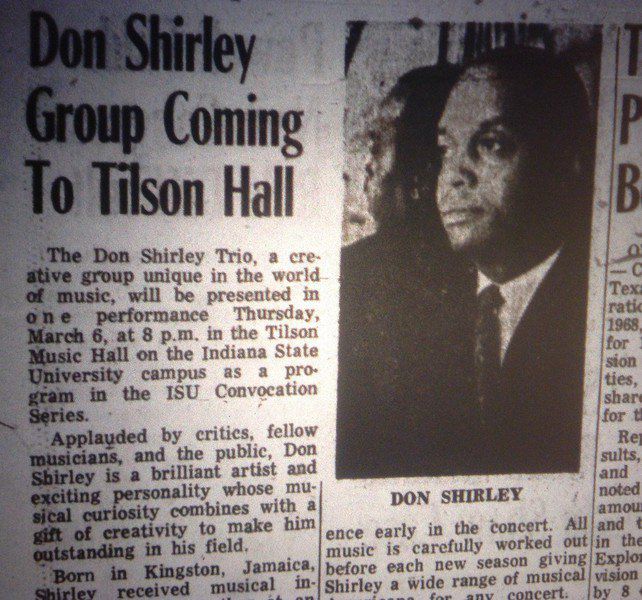