Michael Richardson, who has been with Columbus Police Department for about 25 years, was selected by Columbus Mayor Jim Lienhoop to replace Chief Jon Rohde.

Rohde announced his intention to step down from the position at the end of this year because he has announced his candidacy for Bartholomew Superior Court 2 judge.

“I am humbled at this incredible opportunity to serve the Columbus community, the women and men of the Columbus Police Department as well as our police support staff,” Richardson said.

“I truly appreciate the confidence placed in me by Mayor Lienhoop, and I look forward to continuing the hard work and progress that has made the Columbus Police Department one of the premier law enforcement agencies in the state.”

Richardson is a life-long resident of Columbus and Bartholomew County. He has risen through the ranks of the police department and has nearly two decades of supervisory experience.

“Public safety is the highest priority of any city, and we strive to recruit, hire and retain the best individuals we can in Columbus,” Lienhoop said. “I am pleased to appoint Michael Richardson as the next police chief, and know he will continue the work begun under previous police leadership to maintain CPD’s position as a professional law enforcement agency.

“Our goal is to ensure the safety of the community, while providing fair and impartial enforcement of the law which is responsive to community needs. Under Mike’s leadership, we will continue to meet and exceed those goals.”

Richardson has been married to his wife, Suzy, for almost 27 years, and they have three children.

“Mike has extensive law enforcement experience that has prepared him well to be the next chief,” Rohde said. “I’ve been fortunate to work closely in the Columbus Police Department’s administration with Mike for the past six-and-a-half years. During that time, Mike has demonstrated sound decision-making that reflects our core values, servant leadership, and a deep commitment to the citizens we serve.

“I look forward to working with him over the next six months to ensure a smooth transition, and am confident that our police department and community are in great hands with Mike as chief.” 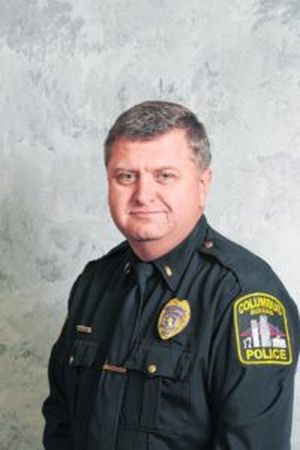