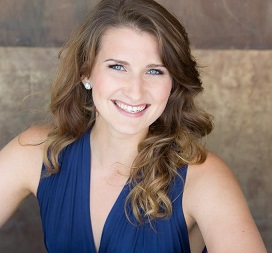 Anna has performed on stages throughout the country and continues to build her operatic career. In the fall of 2016, Anna was granted a full assistantship with Ball State University Opera Theatre where she received an Artist Diploma Certificate.  Anna is the 2017 winner of the Ball State Graduate Concerto competition and appeared with the Ball State Symphony Orchestra.  Operatic roles include Sister Genovieffa in Puccini's Suor Angelica, Josephine in H.M.S. Pinafore and Susanna in Le nozze di Figaro, Béatrice in Béatrice et Bénédict.  Ms. Buck also appeared as Antonia in The Man of La Mancha with the Asheville Lyric Opera. Recent credits include Laetita in The Old Maid and the Thief at the Jacobs School of Music and Pamina The Magic Flute (Abridged) with Reimagined Opera for Kids. She was also selected as a participant in the OperaWorks Advanced Artist program in Los Angeles, CA where she was a featured soloist in the original production Opera Reimagined: Singed.

​In 2015, Anna returned to ISU, to perform as a guest soloist in Mozart’s Regina Coeli in C Major and John Rutter’s Pie Jesu conducted by Dr. Mark Carlisle. During her time at ISU, Anna studied voice with Dr. Colleen Davis and was pleased to collaborate with pianist, Sharylin Spicknall. She was a member of the American Choral Directors Association (ACDA) student chapter as well as the student chapter of the National Association for Teachers of Singing (NATS).  Anna sang with the Sycamore Singers and the ISU Concert choir under the baton of Dr. Scott Buchannan. She currently resides in Northern Indiana.