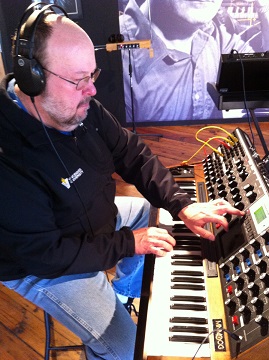 Virgil Franklin is a composer, sound designer, and educator. Virgil Franklin has almost 500 compositions in publication and a growing number of movie soundtracks to his credit.

Virgil has a BA from Indiana State University (1987) and a Masters in Music Technology from The Indiana University School of Music (2005). He currently spends his out-of-studio time teaching audio recording at Vincennes University, directing a steel drum band, running live sound, drumming with his church's praise team and enjoying his wife and family. He serves on the faculty of the Department of Music at Vincennes University specializing in audio recording, music technology and professional tools.  While contributing to a variety of genres, he is known for his work in haunt and horror music. His albums include In the Ether, Night Sins, and Fade to Black. He has also contributed to a number of film scores including A Whisper in the Dark (2015), The Fresh Air Will Do You Good (2008) and A Whisper in the Dark 2 (2017).