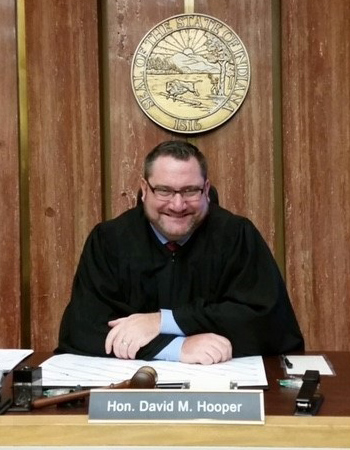 David Hooper (B.S. ‘99) serves as Magistrate Judge in the Criminal Division of the Marion Superior Court in Indianapolis, Indiana.  He has been on the bench since 2011.   Prior to his appointment he practiced law for eight years.  He has presided over or personally litigated more than 50 jury trials and over 100 bench trials.  As a Magistrate Judge he adjudicates criminal matters daily in Indiana’s busiest court system.  His judicial career started in night court where he still holds the Superior Court record for most cases heard in a single overnight docket.

One of Judge Hooper’s passions is helping students and young lawyers navigate through law school, the bar exam, and the early years of practice.  He routinely judges mock trials and moot court appellate arguments for both the IU McKinney School of Law and IU Maurer School of Law.   He has taught continuing education to lawyers and judges for the American Bar Association, various local bar associations, and the American Inns of Court.  He is a 2003 graduate of the Southern Illinois University School of Law and resides in Indianapolis.

Any student wanting guidance regarding law school, the bar exam or the practice of law is encouraged to email him at david.hooper@indy.gov.