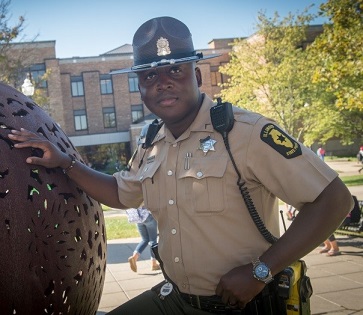 A proud Sycamore, Damein came to ISU on a football scholarship after leading the Walterboro (South Carolina) High School Bulldogs to a state championship as quarterback in 1997.

Damein was the quarterback for the ISU Sycamores from 2001-2003. After graduation, he worked as a social worker in Terre Haute, IN.

In 2007, Damein joined the Illinois State Police and is now a road patrol trooper near the Chicago area. He is married to Christy Cunningham, also a Sycamore alumna. The couple first met in a class in Holmstedt Hall.

When asked about why he chose law enforcement as a career, Cunningham says he was first drawn to law enforcement for the same reasons he was drawn to his love of the gridiron — the physicality, the split-second decision-making, and the adrenaline rush.