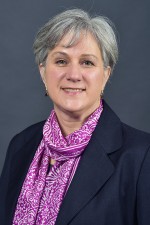 Jane Blyth joined the Haenicke Institute after returning from a year-long stay in Kyoto, Japan, where she was a visiting researcher in the Faculty of Culture and Information Science at Doshisha University. Originally from a small town in upstate New York along the Erie Canal, her first experience with study abroad was in France as a 16-year-old.

Jane studying abroad at Nanzan University in Nagoya, Japan as an undergraduate student.

As an undergraduate student, she studied abroad at Nanzan University in Nagoya, Japan, where she began her lifelong study of Japanese language and culture. Jane holds a B.A. in East Asian Languages and Literature from the University of Pittsburgh, an M.A. in East Asian Languages and Cultures from the University of Kansas, an M.A. in Linguistics and a Ph.D. in Curriculum and Instruction/Language Education from Indiana State University. Her chapter, “Web-based Language Portfolios and the Five C’s; Implementation in Foreign Language College Classrooms” appears in R. Oxford & J. Oxford (Eds.), World language teaching and learning in the N-Generation: Issues and perspectives, National Foreign Language Resource Center, Hawai’i. (2009).

While in Japan, Jane conducted research on using online digital portfolios and podcasts to improve oral English skills in Japanese university students. Jane has taught Japanese, ESL, and linguistics at Kalamazoo College, Japanese and ESL at Indiana State University, as well as Japanese at Moorhead State University and Valley City State University. She has also been a volunteer English teacher at a secondary school in Chiquimula, Guatemala.

As the executive director, Jane's primary responsibilities include:

Serves as principal deputy for associate provost in his/her absence; represent the associate provost in meetings with campus administrators, faculty, foreign dignitaries and university partners as needed
Keeps informed of developments in the field of international education in order to keep WMU at the forefront of developing trends and opportunities
Oversees international alumni engagement plan.