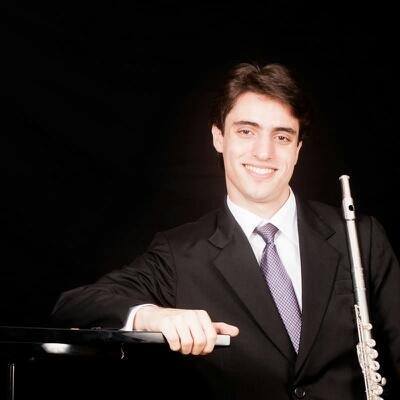 University highlights, achievements and awards: Freshman Honor Certificate from Pi Kappa Lambda, the National Music Honor Society and the Outstanding Underclassman Award for Musical Excellence from the Wind Orchestra as well as recognition by Indiana State university University for academic excellence in 2015–16.

Family ties to ISU: None

I chose to attend ISU because… As an International student, I knew I was going to receive a lot of attention in a small School. Furthermore, I am gaining a lot of experience on my playing, because my professor encourages me to participate in competitions and always play at any opportunity.

When I have free time, I like… to spend time with my friends; however, I always get to practice my flute a lot.

My favorite places on campus to study are… the basement of the Fine Arts Building, where I can get to a room to practice flute, my room, and the water fountain at night when I want to study and get relax at the same time.

My favorite professor is… Dr. Joyce Wilson because she is always able to help her students and has time for extra lessons. She loves teaching; consequently, she is always trying to find different ways to teach something. And the most important thing, she teaches me how to teach myself. She is only there in case I lose the reins on my playing.

If I could share an afternoon with anyone, I would love to share it with… Jean Pierre Rampal. He was a legend on the flute and got to play the flute in the biggest and best places around the world. Consequently, I want to know even more about him; what and how he did to be who he was.

If I knew I could not fail, I would… travel around the world playing my flute and having a life in music. It does not matter where, but to make music using my instrument as my voice and express what it is in the innermost of my soul.

After graduation, I plan to pursue a Master’s Degree in Flute Performance.

The one ISU experience I will always remember is/will be… graduation! At that moment I will remember my whole college experience.

If I knew then what I know now, I would… I wish I could know before what I know now. I see learning, especially when I am studying music, as a game. Every time I learn something new, I pass the level of my own game. “I don’t study to know more, but to ignore less”

If I could serve as a mentor for future ISU music students, I would tell them/suggest that they… should work hard for what they really want in life. Working without a vision, is monotonous; a vision without work, is just a dream; work with a vision, is a victory.

Ricardo Gil is a flute performance major at Indiana State University.   He has been selected for Honor Recital, the Intercollegiate Honor Band and was the winner of the 2016 Concerto/Aria Competition.  On the National Level, he was selected by audition to participate in the National Flute Association 2016 Collegiate Flute Choir.   On the International level, he will be sponsored by the Straubinger Flute Co. to participate in the James Galway Flute Festival to be held in Switzerland in July 2017.

Ricardo is active in the Associated Board Royal School of Music diplomas program.  Past achievements include completion with distinction of Grade IV and V in theory and grade VI in instrumental-flute.  During the summer of 2014 he attended masterclasses, rehearsals, and performances in Winchester, England.   Master Clinicians were Wissam Boustany, Lucillle Burns and Karen Wills.

Academic Awards at Indiana State include a Freshman Honor Certificate from Pi Kappa Lambda, the National Music Honor Society and the Outstanding Underclassman Award for Musical Excellence from the Wind Orchestra as well as recognition by the University for academic excellence in 2015–16.

Primary flute instructors of Ricardo are Luis Ruiz, Joyce Wilson and Claudio Barile. Principal flutist of the Buenos Aires Philharmonic.  His career goals include orchestral and solo performance and completion of the MM in flute performance.