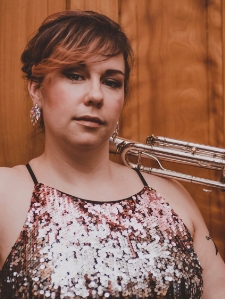 Vibrant and formidable, trumpeter Lexie Signor is making her mark in the commercial trumpet world. After her recent successes with Adele, Keith Urban, and numerous performances with artists like the DIVA Jazz Orchestra, Little Feat, Wayne Wallace and the Orquestra de Sinfonietta, she’s taking the stage as a pop, lead, jazz, and classical performer. She holds two Master’s Degrees and a Doctorate (ABD) in performance from the IU Jacobs School of Music.

Lexie Signor hails from Mackinaw City, Michigan. Ms. Signor holds a bachelor’s degree in Music Education from Northern Michigan University and two Master’s degrees from the University of Missouri in Trumpet Performance and Jazz Performance and Pedagogy, respectively. Over the course of the past two decades, Ms. Signor has dedicated herself to the complete mastery of her musical craft by studying at the Interlochen Arts academy and is currently finishing her doctoral work (ABD) at Indiana University’s Jacobs School of Music. In addition to teaching at Indiana State University, she is also an active freelancer nationally sought after by acts and producers of many genres, touring with shows like the Midtown Men, and various off-broadway productions.

While on the East Coast, she worked with bands such as The Bobby Attiko Band (NYC), The Bachelor Boys (Philly), The Vibe Tribe (NJ), The Don’t Call Me Francis Band (NJ), Legacy (NJ), Brian Kirk and the Jirks (NJ). Other bands she’s regularly worked with include Toy Factory (Indianapolis) and the Sean Imboden Large ensemble (Indianapolis); she is often on the road for work with bands such as DIVA, and many corporate ensembles under Hank Lane Artists (NYC), Elan Artists (NYC), as well as working regularly as an independent contractor.

Ms. Signor has also worked in several other genres including orchestral trumpet, solo classical trumpet, solo classical voice, solo jazz trumpet and as a composer/arranger for big bands, marching bands and various studio work. She was recently selected from a group of the most elite classically trained trumpeters in the world to audition for the Principal Trumpet chair of the Chicago Symphony Orchestra. During her time in Marquette MI, she served as utility/section trumpet under Nuvi Mehta.