The Instructional Resource Center (IRC) was developed in 1977 to fill the need to have certain curricular materials and production facilities close at hand to support each teacher education program in the School of Education. While designed to support the curriculum of the School of Education, the IRC's collection does not contain duplicates of the extensive Cunningham Memorial Library collection of educational journals, research and reference materials, or general book collections. The IRC began its holdings with 2,402 items in six categories: language arts, math, social studies, special education, education, and tests. In 1979, the collection grew to 7,609 volumes, and an early childhood section was added. Materials were added to the collection through recommendations by faculty members and purchased with funds from the individual departments. This insured a balance between subject areas in the yearly additions to the collection.

The IRC, located on the first floor of Statesman Towers West, had been designed as a multi-faceted operation to support the students, faculty and administration of the School of Education. The large central area contained multi-media curricular materials shelved by subject areas, and provided study space and audio visual equipment for the convenience of students and faculty. A 1977 announcement reminded patrons that the IRC provided multimedia materials - "books, filmstrips and transparencies," but it also stated that this was only one facet of the many resources available on campus - giving reference to the Cunningham Memorial Library and the Laboratory School Learning Center. Adjoining this central area were four classrooms in which the methods classes drawing most heavily on these resources were taught. Faculty could request that materials be placed in these rooms for limited periods of time, or could even schedule classes into the Center to work with the materials there. 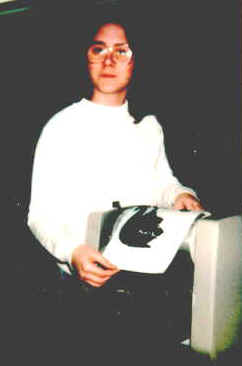 djacent Production Lab area contained the equipment and work-space necessary for preparing teaching materials by then current methods: opaque enlargement, lettering, mounting, lamination, hand-drawn and thermograph transparency techniques, spirit and mimeograph re-production, typewriters, and "junk treasures and magazines for clipping!" Workshops and one-on-one assistance encouraged students to utilize this area. The Student Assistant Manual of 1978 emphasized that the SA's were to assist users not familiar with the procedures, "but do not carry out the production yourself. This was a do-it-yourself Lab." The SA's were also reminded to keep the center neat and attractive with general housekeeping tasks such as straightening, dusting, and watering flowers.

A preview room was available for film previewing, and CCTV viewing was available upon request.  That room also served as a recording facility.

Statistics showed that the IRC was indeed popular. In 1978, 18,409 people used the facilities, materials and services. That number increased to 22,774 by 1979. Popular, too, were the Free Scrap materials in the Production Lab. Each newsletter thanked those who bought in materials, and asked them to continue bringing in "magazines, Pringles cans, fabric scraps, yarn, Jell-O boxes, etc." The latest equipment additions were a regular typewriter, a primary typewriter, and an eight page collator. IBM photocopying w 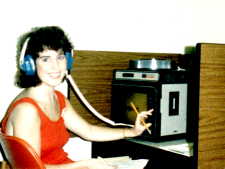 as now available at 5 cents per copy.

On September 8, 1986, it was announced that the IRC would soon receive a LUIS terminal to help search out information about the Cunningham collection. The announcement added, "The LUIS is extremely easy to use and can save you many steps. Future plans include automated circulation and entering the IRC collection on-line." By the fall of 1987, the LUIS terminal in the IRC had a printer so that instead of taking notes, one could "make a computer print-out of the description and location of materials in the area of interest."

The Fall Bulletin 1989, the last mimeographed bulletin, boasted that there were now TWO Luis terminals with printers located in the facility. Students would soon be able to check out computer software, and the Apple lab now had eleven Apple IIGS computers with printers. 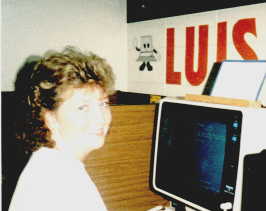 By the fall of 1990, the IRC Fall Bulletin was computer generated, though it was a print, cut and paste job. One year later in 1991, the Apple computers were replaced by seven Macintosh IIsi and seventeen LC models equipped with Apple IIe emulation cards to run the existing software. The printers were replaced with ImageWriter II's and HP Desk Writers. In addition, an Apple IIe was available in the IRC study center, and software for preparing for the NTE was available at the circulation desk.

New to the IRC in 1992 was video previewing equipment for student and faculty use. Two Panasonic VCR/Monitor combinations were available with headphones. An Apple IIe with color monitor was placed in the IRC study center. A Macintosh LC computer with CD-ROM drive and a Laser Videodisk player were available on a cart for classroom demonstrations. And finally, a second coin or card operated copy machine was placed in the lobby!

In 1993 the IBM Computer Lab in 120 was available for scheduling. There were 15 workstations on a classroom network with over one hundred educational software packages. The outdated Telex terminals were replaced by PC's with connections to the campus Local Area Network. This allowed connection to LUIS and the other services of the ISU network.

In 1998, the Instruction Resource Center received an entirely new look. Within the reorganizing of the technology of the School of Education, the IRC changed both its function and outreach. The entire collection was inventoried, and all out of date materials were eliminated. The focus was then changed from kindergarten through 8th grade to just kindergarten through 6th grade. This new narrowed range of materials allowed for a greater depth and higher quality in available materials. For example, the IRC would now contain all of the state adopted texts in math, language arts, and social studies for grades K-6, as well as a selection of science texts.

The IRC's Production Lab was transformed into the Media Lab, but retained most of the material preparation equipment which made it a long time favorite of Bayh College of Education students.

Continuing to keep the most up-to-date materials and equipment available, the Instructional Resource Center remains complementary and fully integrated in the current efforts to prepare the students of the Bayh College of Education. The IRC started offering digital cameras, digital video recorders, LCD projectors, laptops with wireless network and other services. 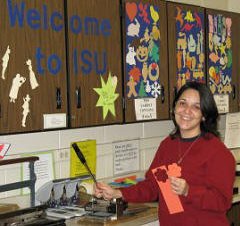 In 2008 the IITS/IRC added dedicated studios for video and audio production to allow students to import, edit and create DVDs, podcasts and other media. A poster printer, award maker and computerized die cut machine. 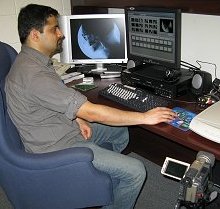 In July 2009, the IRC moved to its new home in University Hall Room 008K. With a larger space and dedicated equipment room the IRC offers new equipment and services such as a computerized cutout maker, poster maker and award/label maker. 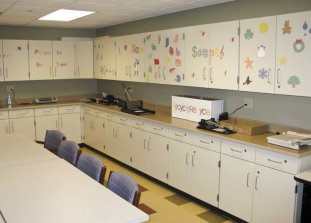 In August 2013, one of the computer labs was converted to the Collaborative Learning Room with pod tables, big screen TV and projector to allow for small and large group collaboration. Also the former printer room was converted into the Laptop Lounge where students can work on their laptops in comfortable chairs and even charge their technology devices. 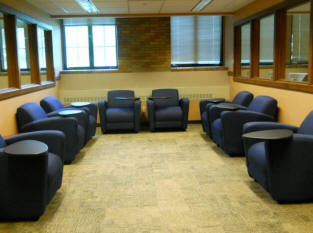 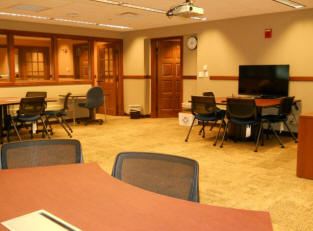