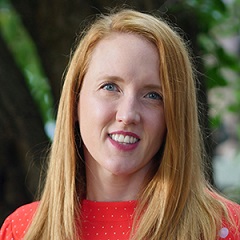 Anne Newton McFadden graduated from Indiana State University in 1999 with degrees in Spanish and Political Science.  While a student at ISU, she participated in the study abroad program in Costa Rica and was involved in a variety of student groups, including Amnesty International, the Pre-Law Society, and Golden Key National Honor Society.  Anne attended law school at Georgetown University Law Center, graduating in 2003.  During law school, Anne spent her first year summer working in the legal department of a large corporation in Monterrey, Mexico and her second summer working at a law firm in New York City.  After graduation, Anne clerked for the Honorable Francis M. Allegra on the U.S. Court of Federal Claims in Washington, DC.  She then joined the law firm Cleary, Gottlieb, Steen and Hamilton LLP in Washington, DC where she worked as an associate, focusing primarily on antitrust litigation and investigations and international arbitration matters, as well as handling a number of pro bono asylum matters.  After three years at Cleary Gottlieb, Anne joined the U.S. Department of Justice Antitrust Division, where she held a number of positions over the course of her 11 years there.  These positions included Trial Attorney, where she worked on a number of high-profile investigations and litigation in a variety of industries, Attorney Advisor in the International Section, where she advised and interfaced with foreign governments on competition issues, and, most recently, as Counsel to the Director of Civil Enforcement, where she advised the highest ranked career official in the Antitrust Division on antitrust policy and case strategy.   Anne recently returned to Indiana after 18 years in Washington, DC and now serves as the Assistant Dean for Career Services at Indiana University Maurer School of Law in Bloomington.  In this role, Anne oversees the Career Services Office, develops career-related programming, and advises students on their career goals.