Mental health professionals and mass shooting experts in the Greater Cincinnati area are saying the key to figuring out how to stop mass shootings will come through understanding the mindset of the killer.

“These people have anger and they pick a person or a target to fester about and to fantasize about that anger and payback,” Murray said.

Despite having serious disorders, many of those who become a mass shooter stay off the radar of law enforcement.

“They buy their weapons legally, they’re not in trouble with the law. Most people would say, ‘He seemed like an OK guy, but really was off by himself,’” Murray said.

It makes recognizing a potential shooter difficult, even when police have contact with the person before the shooting.

“What we do in training is look at how can we early identify individuals that might need help,” said crisis intervention expert Elizabeth Atwell.

Atwell spent 20 years training Cincinnati police officers in recognizing and working with people they encounter who have mental issues.

“These police and mental health collaborations that are coming up around the country are key to helping people get treatment early,” Atwell said.

Murray and Atwell agree the best solutions to stopping mass shootings will likely come through learning the mindset and recognizing the signs of those who need help before it’s too late. 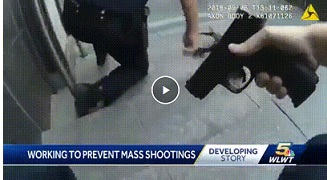