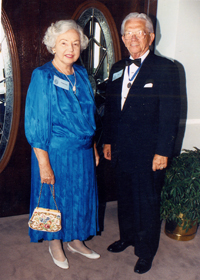 Welby Frantz was a trucking industry executive in Terre Haute and a long time advocate and benefactor of higher education. Frances Frantz was a teacher of dance and physical education in Peoria, Ill. prior to the couple’s marriage.

During a nearly 30-year career with Eastern Express, from 1946 to 1975, Welby Frantz built the company into one of the leading motor carriers in the United States. He shared his knowledge of business with Indiana State students as a distinguished executive in residence in the ISU School of Business.

“Welby worked for the same company for nearly 30 years and had a more than 30-year relationship with Indiana State. Welby Frantz knew the meaning of loyalty – loyalty to his business and to his community,” said Donald E. Smith in 2002, a member of  Indiana State University’s Board of Trustees and a long time friend of the Frantzes.

Frantz served 30 years on the ISU Foundation Board of Directors, 15 years as the board’s president. He also served on the board of directors of Terre Haute First from 1964 until his death in 1996. Frances Frantz died in September 2001.

In 2002, a $500,000 donation from the Frantz estate was split evenly for scholarships in the couple’s names in the Indiana State School of Business and for student athletes. Welby was born on October 27, 1912 and passed away on September 13, 1996 at age 83